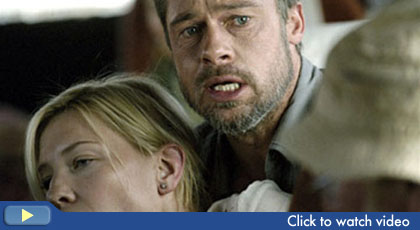 The Babel of the Bible is nothing compared to the many forms of Babel in our time. People today are cut off from each other by race, language, culture, and tradition. Ingrained ideas about who belongs in our communities, coupled with prejudice against outsiders and fear of terrorists, have us clustering in small barricaded units while we ignore religious understandings that we are all connected in one human family. Babel exists wherever people are at each other's throats or stuck in situations that bring out their fear, anger, hatred, or violent behavior.

"Babel," the movie, focuses on four families from four countries. They are a goat-herder and his two small sons in Morocco, a deaf-mute Japanese teenager and her father, two well-to-do American tourists in Morocco, and the Mexican nanny to their small children in southern California. Faced with trials and tribulations that would test any soul, the characters all have trouble communicating what they are feeling and what they need. The director, Alejandro Gonzalez Inarritu, describes this as the tragedy of the human condition--"the impossibility to be touched by love, the impossibility to touch with love and express it."

A lot of spiritual writing over the centuries has focused on where humankind has missed the mark (think of the Prophets and the Psalms). "Babel" would be a deeply spiritual film if all it did was illuminate the grief that results from human disconnection, both locally and globally. But the movie does more.

Throughout the story we witness small moments of light and love and kindness and compassion. Forced to deal with situations where they are uncomfortable and stressed, the characters demonstrate remarkable resiliency. As viewers, we find ourselves identifying with them, recognizing our commonalities rather than focusing on our differences.

In yet further testament to the enduring legacy of director Robert Altman, who died earlier this year, another film that owes an enormous debt to Altman's multicharacter, multifaceted, hyperlinguistic films is an Oscar frontrunner. "Babel" is joining such recent efforts as 2004's Best Picture winner "Crash," P.T. Anderson's "Boogie Nights," and "21 Grams." Much like Paul Haggis' "Crash"--a tin-eared drama of urban anomie via racial epithet--"Babel" (directed by Alejandro Gonzalez Inarritu, who also made "21 Grams") mistakes the formal advances of Altman's films with the whole of his technique.

In "Babel," much like his previous two films, Inarritu deftly cuts between a disparate batch of characters separated by time and space, manipulating the disorientation his film creates for maximum dramatic impact. "Babel" is intended to be about the ways in which language fails us, but its examples are inert at best, more often tending toward the silly. Altman would never have made the links between his characters so tenuous, or ultimately so dramatically inept; nor would he have directed a film about language with so little grasp of its power.

"Babel" has little to tell us about the world we live in, other than regurgitating ponderous clichés about important issues. It's intended for an audience that wants to acknowledge social problems, but not think too hard about them.

As such, it is a perfect successor to "Crash." Look for the voters of the Academy to name it their best picture of the year, but if you want to see a multicharacter drama with real fire in its belly, rent Altman's "Nashville" or "Short Cuts" instead.