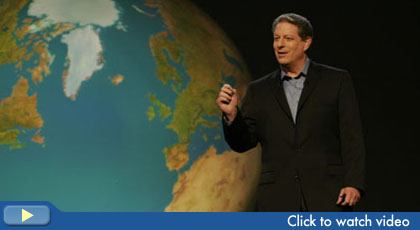 Care for the earth is God's work and it is called the stewardship of creation. This ancient teaching flows consistently from Genesis (1, 2, 3) to Leviticus (25), the Psalms (8; 104) to Isaiah (Is 32:15-18) and to the new creation flowing from Christ's redemptive work (Romans 8:19-23). At times direct, at other times taking the form of praise and worship, God's invitation and directive to care for the earth and to safeguard the environment and natural resources for the sake of people is an act of living faith. If ever a film evoked echoes of God's Word and our responsibility for the earth, "An Inconvenient Truth" did it for me.

As the film and television columnist for St. Anthony Messenger (a major national Catholic monthly magazine established in 1893) for the last five years, I receive my share of mail from dissatisfied and disgruntled readers who actively disagree with my views. But no review garnered as much negative feedback from readers--not one of whom admitted to having actually seen the film--as my analysis of Al Gore's spiffy lecture on the environment.

Ironically, one of the seven basic scripture-based principles of Catholic social teaching is care for the earth. As reports of the polar ice cap melting and the uncertain future for its indigenous creatures make front page news months after naysayers pooh-poohed its science, "An Inconvenient Truth" (in its environmentally friendly DVD packaging) continues to embrace and celebrate this principle with facts and calm reasoning. Al Gore never gets in the way of his call to action about global warming but accessorizes his theme with self-depreciating humor. As he takes us with him on a journey to his country roots to show us why he cares for the earth, he doesn't scare but invites and motivates us to care as well. And why not? We have nothing to lose and the world to gain.

I might or I might not ever vote for Al Gore. But I will vote for the environment.
-- Sister Rose Pacatte