This month: 'Freedom Writers,' 'Stomp the Yard,' 'Arthur and the Invisibles,' 'Night at the Museum'

At first, I was a little taken aback that most of the recent films with black leads ("Akeelah," "Take the Lead," "Happyness," "Freedom Writers," "Stomp the Yard") have been set in lower-class neighborhoods rife with violence and righteous anger. But on reflection, it is important to give voice to the “have nots” who ordinarily might remain invisible and misunderstood. Both of this month’s movies spotlight the difficulties in bridging--or jumping--the gap between classes, and between the “haves” and “have nots.” 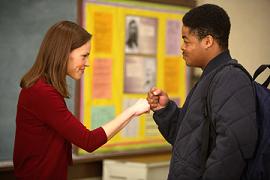 Going in to this movie, I felt I’d seen it before: class of unruly kids, abandoned by the system, is saved by one plucky teacher who won’t give up on them. Turns out I was right, although that’s not necessarily a bad thing. "Freedom Writers" is an edgier, more abrasive version of last year’s television movie "The Ron Clark Story." While "The Ron Clark Story" was set in a New York City middle school, "Freedom Writers" is set in a high school in Laguna Beach, California. Both are based on true stories, and both are superbly acted. The emotion of watching both sets of kids turn around is truly inspirational.

Yet I would say "Freedom Writers" is really for viewers high school age and older. Its turning points are things like the teacher (played by Hilary Swank) relating gang membership to the Nazis and the Holocaust. It brings up many issues that might be especially disturbing for younger viewers, because they can’t yet appreciate the context in which all these things are being discussed.

It’s a tough movie to watch, even for adults, since it turns an unblinking eye on what it’s like to live in a community where you might be shot for walking out the front door or framed for a murder because you were playing a videogame at the wrong place. It’s about a group of kids who cling to their own ethnic groups because their “tribe” is all they have to cushion the violence during what they’ve come to accept will inevitably be a short life.

How a naïve white-bread teacher turns the kids around and gives them a justifiable hope that they can live beyond their teens, and even perhaps go to college—it is an inspiring thing. Especially inspiring is to watch how a classroom made up of kids of many ethnic backgrounds becomes a family, in much more meaningful ways than the family many of them have at home. So this movie is recommended for adults and teenagers, but leave the preteens and younger at home. Or, better yet, rent and watch "The Ron Clark Story" and watch it with them. 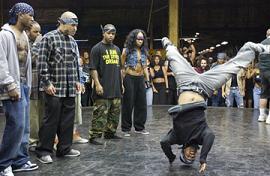 "Stomp the Yard" is oddly like the sequel to "Freedom Writers." This one is for older kids too: Though the ‘tweens might appreciate the stomping, the opening of the film is disturbing. It follows a young black man from the 'hood, who feels responsible for his brother’s death during an ethnic brawl over a dance contest. He is shipped from L.A. to Atlanta to live with his aunt and uncle on the condition he attend Truth University, the black college his aunt attended.

Once there he must learn to let go of the justifiable anger that he uses to shield himself from the world and from his own emotions. From there, it basically become a recruiting film for black fraternities--according to the film, every major African-American since the Revolutionary War has been a fraternity or sorority brother or sister. The stomping in the movie is fun--it’s a form somewhere between dancing and drill team. I would argue that people of any ethnicity can in fact make it in the world without pledging. Still, watching a young man decide it’s okay to change classes--and not just the college kind--is an interesting journey to take.
Arthur and the Invisibles 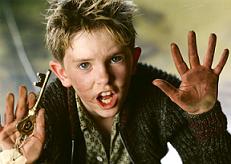 Not much has been made of "Arthur and the Invisibles," but it’s a fun film for the 'tween and under crowd. It’s the story of a boy, played by Freddie Highmore (Charlie from "Charlie and the Chocolate Factory") who must find his missing explorer-grandfather and find a stash of rubies to save the family farm from ruthless developers. The twist is that both the grandfather and the rubies are being held captive in a world populated by tiny people within Seven Kingdoms--completely hidden in Freddie’s own backyard.

In many ways, it’s a metaphor for the imagination of youth, when whole worlds of adventure are available in your own backyard. To find grandpa and save the day, Arthur must become one of the tiny denizens of invisible kingdom. In doing so, he Freddie Highmore becomes the voice of a CGI-version of himself. It’s a fun movie for the younger set, although my daughter recommended it “for ages zero to kazillion,” and I quite enjoyed it myself. There are certainly worse ways to spend a snowy day.

Night at the Museum 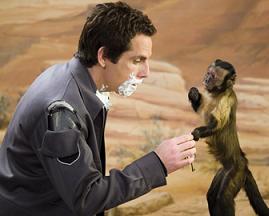 Who of us hasn’t been in a museum or wax gallery, seen all those almost-alive versions of people and animals, and fantasized about what would happen if they all came alive? That’s the premise of the book on which this film is based, and it’s a fun one.

I’ve got to say, the plot of "Night" has so many holes it’s like the Alpine Lace of family films. (Why does everything come back to right the next morning--except the rules? So these aren’t really Teddy Roosevelt or Genghis Khan, they’re wax figures with their personalities? Then why would the beautiful museum guide hyperventilate over the chance to meet a wax statue with the personality of Sacagawea? Or, wait, King Tut really is King Tut reanimated--or is he?) Well, never mind. It’s a fun movie (though not exactly a classic) for all ages, if you don’t think about it too much. And it’s great fun to see Dick Van Dyke and the other older actors out and about, especially as bad guys.

"Night at the Museum" gets snaps for being the one holiday movie that my whole family--young children, college-age cousins, parents, grandparents--all agreed to see, and all enjoyed. And both my college-aged nieces were lured back to the Museum of Natural History--which, I suspect, was one of the main purposes of the novel to begin with.