An enthusiastic thumbs-up for 'Eragon,' 'Charlotte's Web,' and 'Pursuit of Happyness.'

Beliefnet
Here are three movies that each qualified for me as holiday surprises--in some way, each wasn't what I expected it to be. Each has a message of good triumphant. But each goes about telling the tale, especially to children and young adults, in a very different way.


Reviews In This Article
'Eragon'
'Charlotte's Web'
'The Pursuit of Happyness' 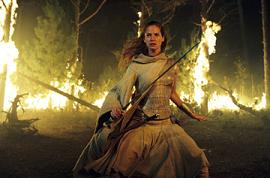 For me, the big story of last weekend wasn't that Will Smith topped the box office in a non-action film, but that "Eragon" stomped "Charlotte's Web," one doing $10 million better than expected, the other doing $10 million worse. It was especially surprising because Charlotte garnered nearly universal raves, while "Eragon's" reviews were fairly dismal. But it didn't surprise me. I saw it coming.

My 11-year-old son and his friends made it clear they would not be caught dead watching "Charlotte's Web," but they were in the van for Eragon faster than maggots can wriggle on a Razac's face. Not surprising. But earlier, when I was recruiting watchers for "Charlotte," the sweetest, most ladylike friend of my 9-year-old daughter said she would be pleased to see "Charlotte"--if I'd take her to Eragon first. Hmmm. Was it that these kids had read the book? Been hooked by a good set of trailers and would be disappointed at the film?

It seems not. Young ladylike Jordan cheerfully gave "Charlotte's Web" a 4.5--and "Eragon" a perfect 5. Not only that, on the way out of the Eragon theater, I ran into a girls' birthday party, featuring several middle school girls I knew. When I asked what they thought of the film, they gushed, and it was serious gushing. Their vocabulary of superlatives was tapped out. "It was so much better than we expected!" cried one. "We thought it was going to just be some movie about some boy and his dragon." "But it was a movie about a boy and his dragon," said I. "Yes, but it wasn't just a sweet, oh-I-can-read-your-thoughts story," added another. "Yeah, they did stuff," another agreed.

And I think that's where we adult reviewers missed the boat. The young viewers of the film saw it as the story of a youngster powerless to change the hard times and evil world into which he'd been born. But then he's given a dragon egg, and it turns out he does have power, he can take action, and he can actually change dilemmas hoisted on him by corrupt adults. What's more, Eragon (the boy), suffers that plague of inexperienced youth--he's "one part courage, three parts fool," but even though he consistently makes mistakes, he does the best he can, and is still able to triumph. Not to mention, he gets to ride a really cool dragon.

A warning: The film is not for younger viewers. In fact, I'd say 9 is the cut-off point. The battles are violent, the villains are scary (face of maggots is especially unappealing), but I think the girls were okay with them because they are very fairy-tale battles.

As an adult, the film wasn't necessarily one of my favorites, especially since we're living in a time where we know that war injures the souls of everyone involved. Also, it bothered me that the evil armies who are killed are the poor conscripted boys from the beginning of the film. Oh, well. I'd count on the 9-16 word of mouth on this one. 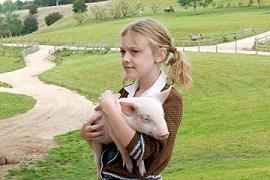 There's something just so delightful and fresh about the prose in E.B. White's book that it's hard to put the plot on screen and see the magic. This version of "Charlotte's Web" comes much closer than any retelling so far. First of all, Dakota Fanning as Fern is as charming and natural as always, and the voices of both Wilbur and Charlotte are perfectly cast. But the best thing about the movie is that it uses White's prose generously in voice over, and we're reminded that the story really is about friendship, and how lives, barns, towns, and well, the world, can be changed by the arrival of a pig--or a person--who sees beauty and friendship where none was seen before.

The setting of the farms is fantastic (though I was sorry it was filmed in Australia, not Maine), and the animals talk so flawlessly that it's hard to remember there was a time when talking animals in films looked hokey. Small changes have been made to the story, but they all worked for me. For the first time I understood why it was a good thing that Fern rode the Ferris Wheel with a boy, and how Wilbur and Charlotte had helped bring that about.

The film is very sad at the end--for grown-ups who enjoy a good cry, that's fine; children will respond to Charlotte's death in different ways. Bottom line: This is a first-rate production of a beloved classic. My guess is, while its current box office may not match that of "Eragon," this Charlotte will be around for a long time, due to the appreciation of parents, teachers, and all those who enjoy seeing a childhood classic brought loving to life.

The Pursuit of Happyness

I took two 11-year-old boys along to see this film, and I was glad I did. It's one of those movies that is finally not about the plot. It's about living in someone else's world for two hours. In other words, the miracle wasn't (and isn't) that after the movie, the real-life Chritopher Gardner became rich. It was that for two hours, my son, his friend, and I understood what it was like to be poor.

I went to the movie afraid that, since it was based on a true story, it would spend half the movie showing Mr. Gardner's rise to mansions and cool cars. When it got close to halfway through the movie and he still hadn't secured a Dean Witter internship, I realized the movie was going to dwell in his life, and his struggles, and show the triumph of the spirit that led to his financial success, not show the financial success as the triumph in itself. It's not about becoming rich. It's about tenacity, ingenuity, and never giving up.

The story is at once touching and harrowing. But what comes across, both to the little boy in the movie and to the audience is that, while the father's hold on any kind of financial viability is tenuous and slipping, his hold on—and his love for—his son is absolute. To see how easy it is for a family to make a bad investment, and slip from lower middle class to homeless, possession-less, and hungry is truly frightening. But the fact that millions of American children go to bed hungry at night means this is a hard fact we need to not only comprehend, but feel compassion for.

The audience of the movie was the most diverse I've seen for quite a while, both racially and age-wise. The film does show the effects of racism in ways a simple and angering as having one of the Dean Witter partners constantly choose Christopher, the only black intern, to get his coffee and park his car. You also see how Christopher's faith helped him, and how he was a truly decent man who would raise a moral son, no matter what their tax bracket. I didn't think the film was finally about the Almighty Dollar--neither of the boys I took had a clue what a stockbroker does. It showed what we once meant by the "American dream"--and how it means no matter how many times you're knocked down, it's about having the faith, courage and tenacity to get up one more time.

I would recommend the film for families. I hesitated to bring my 9-year-old daughter, because I was afraid she'd be frightened by the idea of losing your house and your things. But as I mentioned, Christopher's son never feels endangered. You know his dad will take care of him no matter what.

Eleven-year-old Ryan, exiting the movie, said, "Where was Will Smith in that film?" And in a way he was right: it wasn't the kind of role you usually associate with Will Smith. But after a moment's reflection, Ryan also said, "It shows you should appreciate what you have, because you never know when you might lose it." And proving that the poor are not so very different from you and me.