Beliefnet
Here are three films that, on the surface, could not seem more different. Yet each tells the story of a protagonist--an orphaned teen, a dispirited dot-com entrepreneur, and a trained bear--who must realize and claim his own inner strength. In fact, each film has a scene in which you can practically hear the echo of Glenda the Good Witch telling Dorothy that the power to return home has been with her the whole time. If you enjoy a good spy caper, pack up the kids and head for "Alex Rider: Operation Stormbreaker." Based on a series of popular young adult novels, Alex is your typical 14-year-old dreamboat orphan whose uncle happens to be James Bond--well, actually, superspy Ian Rider (played by Ewan McGregor, in fine fettle). When his uncle is killed, the top brass at MI6 recruit Alex to finish the assignment.

I have to admit something here: I've been a 14-year-old spy at heart since I was about 8, and this is the caliber of intelligent, witty film I've waited for. It's not big and wacky and special-effects driven like the "Spy Kids" films, which were certainly well-made but skewed slightly younger. It's also not full-on Bond. There is no sex, or even sexual innuendo (just heavy dreamboating), no swearing, no blood. There's a 14-year-old kid who never put together why his uncle had taught him martial arts, four languages, sky and scuba diving, and how to keep a cool head. Alex must now stay alive and prove himself during a way-cool adventure.

The plot revolves around a computer tycoon (Mickey Rourke made up to look like a horror show version of British tycoon Richard Branson) who has invented a fantastic new computer system, donated versions of which will be turned on in classrooms in every British school simultaneously. You know that can't be good.

The film is just cartoonish enough that deaths of several bad guys (no deaths are actually seen), provoke an "ewww" for their dastardly ends. Yet it feels real enough that the subtext of death and loss give you a soft spot for young Alex. Another great thing in this film: The girl Alex has a crush on isn't rescued by Alex; she rescues him. You go, girl!

For those of us who enjoy British thespians, "Alex Rider" is a virtual buffet: Robbie Coltrane (Hagrid), Ewan McGregor (Obiwan Kenobi), and Bill Nighy (Davy Jones), who seems to be having the time of his life chewing scenery as totally different characters in his recent films. I couldn't quite figure out why Alicia Silverstone was cast or continually made being American seem so jarring.

I'm afraid that this film will fly just under most people's radar. It's one you don't need to bring a kid along as an excuse--but if you do bring them, they'll love it.

Employee of the Month 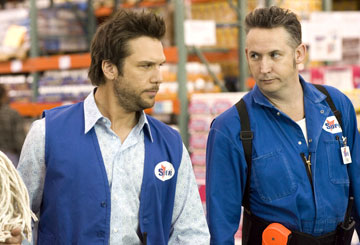 Here's something the marketing people don't want you to know about this movie: It isn't an asinine adolescent comedy flouting Jessica Simpson's assets, as the trailers and ads suggest. (In fact, several of the off-colored jokes from the ads aren't in the movie at all.) It's a sweet-natured romance about a young man who bet, and lost, everything as the owner of a dot-com. The fact that he lost his own money doesn't cripple him as much as the fact the he lost the life savings of several investors, including his own beloved grandmother.

As a result, he's lost any ability to take responsibility and works for a local warehouse store (ala Costco or Sam's Club) as a wise-cracking box boy, who hangs with the other non-threatening employees.

Then Jessica Simpson arrives as a new cashier. Rumors precede her--she only dates the top dog, the "Employee of the Month." So Zack must begin to face his failures as he decides to compete against the obnoxious store wise-guy for top honors.

Looking for deep meaning in this movie may be a stretch, but, surprisingly, it wasn't a film I was embarrassed to let the kids see. (I'm sure Jessica's minister-father breathed a sigh of relief as well.) There is some off-color banter, but it's fairly mild. There's a subplot about Zach needing to discover that just because he'd become a self-made loser doesn't mean his friends are losers. And then there's the biggest fantasy of all: That a sweet, smart, approachable woman who looks just like Jessica Simpson will show up at your place of business looking for romance. Memo to the guys: Good luck with that.

We saw Open Season in IMAX 3D, and it was visually stunning. I wondered occasionally how it would play in 2D, since minute-by-minute plot points were obviously arranged to have things flying at the audience in quick succession. In short, the film (this version) was huge, over-stimulating by design, and fun. It wasn't surprising that the list of people who did visual effects was three times the length of the cast.

My biggest complaint about TAMs (talking animal movies) is that there seems to be, in the colloquial term, a vast animal-rights conspiracy to make all our children vegetarians through misinformation. The underlying plot of virtually every TAM this year is that the food chain is nonexistent. While we wicked human might eat animals, animals themselves are certainly too civilized to ever hunt or eat each other. Thus, you have bears and deer teaming up, or (in "The Wild") lions and giraffes--the list is endless, the plots completely nonsensical.

Don't get me wrong, I am certainly not in favor of animal abuse, but I'm also against deriding humans under false circumstances, and if the filmmakers' collective mantra is that we humans need to get off the food chain because the animals already have, it's false advertising. Should they have other, more logical, reasoning, I'll be glad to sit through it. It may seem I'm overreacting, but for the last three years, I've paid close attention to the animal rights messages playing relentlessly through the Disney channel and other TAMs, and it seems anything goes, whether it's truthful or not. It took quite a while of hearing strange reasoning from youngsters to realize they'd been getting fed a steady diet of enlightened misinformation, but enough already.

"Open Season" is not the worst offender in this regard, even though, as the title suggests, it's more anti-hunting. (In fact, bunnies seem to be so low on the animal pyramid that the other animals feel free to kill or abuse them at will for comic effect.)

Bottom line on "Open Season": incredible graphics. Script more intelligent than most. Wise-cracking sidekick (Elliot the one-horned deer) definitely more annoying than endearing. Final climactic fight in which all the animals band together to roust the hunters: "I thought it would be funnier," said my son. I did, too. If your kids are of an age to love TAMs, "Open Season" is not a bad way to root for all those vegetarian animals on a rainy Saturday afternoon.