Morality of 'The Departed' 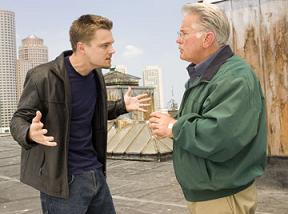 Ask Martin Scorsese about religious subtext and you'll get a straightforward answer--no narrowing of famously bushy eyebrows, no looking helplessly at the cadre of publicists gathered in the back of a journalist-crammed room. Faith has been at the forefront of his films since "Who's That Knocking at my Door?" introduced Harvey Keitel to movie-stardom 1969. And faith--or lack there of--is weaved through "The Departed" (opening Oct. 6), which sets the classic good cop-bad cop battle on unwavering Irish Catholic moral ground.

"I've found myself attracted to that kind of material for years," says Scorsese, who aspired to be a priest before the film bug bit. It's a rainy Friday afternoon, and the director has joined his cast--Leonardo DiCaprio, Matt Damon, and Vera Farmiga--and screenwriter William Monahan at a Manhattan hotel. Nonchalantly oozing star power, they line up to talk to the press about the film. "The Departed," represents a true return to form for Scorsese, who took an acclaimed break from his usual urban milieu with "The Aviator" and traveled back a century for "Gangs of New York." Rooted once again in the present day, "The Departed" is set in South Boston, where the Massachusetts State Police tries to end the rein of larger-than-life mob lord Frank Costello.

"He's beyond God," Scorsese says, describing Costello, who is played powerfully by Jack Nicholson in their first collaboration after 30 years of friendship. "He's got all the money, he's got all the drugs, (but) he's still not satisfied and he opens himself up to be taken in by his sons."

The father-son relationship has been one of Scorsese's themes for quite some time, dating back to "Raging Bull" and finding shaky spiritual footing in "The Last Temptation of Christ," a controversial adaptation that Scorsese hounded Hollywood for years to make.

In the case of "The Departed," the sons are surrogate ones, and are played by DiCaprio and Damon: the good and bad cop, respectively.

"They're like two sides of the same coin," DiCaprio says. "They come from different backgrounds but they could have easily made the choices the other character made."

The film opens with the mob boss Costello taking 12-year-old Colin Sullivan under his wing, before fast forwarding about a decade and a half, when Colin (Damon) graduates Police Academy with the highest honors. His classmate Billy Costigan (Dicaprio) is just as smart but, no thanks to his rough-and-tumble upbringing, is sent undercover by the Massachusetts State Police, headed by Captain Queenan (Martin Sheen).

It is then that Billy enters Costello's desperate, dangerous world, posing as a fellow wise-guy while reporting back to Queenan. Colin, meanwhile, rises quickly in the police ranks, while keeping Costello apprised of the police investigation. And while Colin lives comfortably in a posh riverside apartment, Billy toughs out his days with Costello in the dingy backroom of a bar, treading tentatively as his only priority becomes survival.

"We're at a moral ground zero in a way," Scorsese says. "God doesn't exist anymore in the world that they're in."

If the sex and drugs and downright vulgarity of Costello's underworld represent all of the corruption in South Boston, Sheen's Captain Queenan is something of a moral beacon, a devout Catholic who presides over the police force with a firm hand and thinks that he has earned a loyal following. But when Costello and crew sniff a policeman "rat" in their midst, good faith doesn't help him.

"Irish Catholics sometimes have to take a big jump to get away from their formative environments," says Monahan, who created a pivotal scene, in which--given Colin's orders--Queenan is trailed by once-loyal members of his police force, as an "overt reference to the Luciferian revolt"--a rebellion against Catholic priests, the Vatican, and anything and everything representing Catholic faith.

"What are we supposed to do," one policeman asks, "follow the good Catholic life?"

Fitting, considering the Boston-born screenwriter ("Kingdom of Heaven") has placed "The Departed"--an adaptation of the Hong Kong hit "Infernal Affairs"--in the Irish Catholic community of his youth. The film has Catholic ties right down to the title: "The Departed" refers to the "faithful departed," i.e., the dead.

"I've always felt a close affinity with the Irish, particularly coming out of the same area of New York City," Scorsese says. "We felt very close to the culture, the family structure. There were some differences when they first moved in the same neighborhood, but... the Irish sense of Catholicism is a very interesting contrast to the Italian sense of Catholicism."

Throughout the production, Scorsese, Monahan, and principle cast members mulled over the script, making sure that moral ambiguity spared no one, least of all the only woman, Madolyn (Farmiga), a police psychologist living with Colin and sleeping with Billy.

"She's as duplicitous as anyone else," Farmiga says. "She's pushed by her desire and pulled by her conscience."

Given Scorsese's devout upbringing, does the often-extreme violence in "The Departed" pull on his conscience?

"I can't defend it," says the director, who grew up in mob-infested New York and, judging from his films, seems to have bloodshed in his bones. "It's part of who I am. (But) if you're going to see the violence you better experience it powerfully."

"I hear about the portrayal of violence in cinema all the time, particularly gratuitous violence," Damon says. "As violent as this film is, none of that is gratuitous, and the characters all pay a price for the violence they inflict on others. It's a good message to send out to people."