Back to School Treats

Have fun with your kids at 'Lassie' and 'How to Eat Fried Worms.' Leave them home for 'Talladega Nights.' Skip 'Material Girls.'

Beliefnet
Here are a couple of back-to-school treats--movies that kids will want to see, with actors their own age and situations that are recognizable if not realistic. Both are based on actual literature--books they can read, and may even want to! My quibbles with them are minor, so if you'd like a family night out, head for either "Lassie" or "Fried Worms." 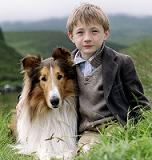 The current generation only knows Lassie through oblique cartoon references: "What's that? Timmy's stuck in a well? And we've only got five minutes to get him out?"--which of course references the long-running black-and-white American TV series of years gone by. But the original story of Lassie and the ensuing book were both British, and the original film, "Lassie Come Home," although filmed in Hollywood, was set in the U.K.

So it makes sense that when British filmmakers wanted to reintroduce Lassie to a new generation, they went back to the original story, in its original setting. It's set against the backdrop of World War II, when children are being evacuated from London, and (at least some of) the local mines are closing. Like the Pevensie children of Narnia fame, our young heroine gets sent to a large house in the country overseen by a single elderly gentleman, this one being her grandfather, who's also a duke. She sees, and likes, a local collie, and her grandfather agrees to get it for her at any price. The problem is, of course, that Lassie belongs to Joe, the son of a poor mining family. The family can sell ownership of Lassie to save the family, but they can't take the love and loyalty out of the collie's heart. The plot centers around mistreatment of Lassie by the duke's mean-spirited kennel man, and Lassie's subsequent journey home from remote Northern Scotland. It's echoed by mistreatment of Joe (the new Timmy) by his teacher, of Joe's dad by the bosses, the duke's granddaughter by everyone at her boarding school, and even of a well-meaning puppeteer by murderous idiots just for the heck of it. In fact, if it weren't for Lassie bringing the good people together, all of Britain would apparently have descended into tyranny by now.

Lassie is a well-made film, sentimental but affecting. My 11-year-old son said he "enjoyed it much more than he thought he would." My 9-year-old daughter said she would warn anyone who loves dogs not to see the film--but she cannot get past animal deaths, and there's a violent one in Lassie. (Sometimes I think filmmakers who make animal movies don't realize the large percentage of their core audience who cannot tolerate the demise of animals.)

At the center of it all is Lassie, a beautiful dog, kindhearted and true, and it was great fun to introduce her to a new generation. (And yes, the main dog is a female, and descended from the family of the original.) If that sounds good to you, this is a good bet.

How to Eat Fried Worms

"How to Eat Fried Worms" is a fun film, and your kids will probably love it. It has many good themes, such as standing up to bullies, facing your own fears, and discovering that kids are kids, wherever you are. It stars boys who act like boys, and yes, involves the eating of worms. If your kids are 14 or under, they'll enjoy the film, although 13 and up will probably act nonchalant. This is a family film the whole family can enjoy. Go, see it, have fun.

That said, here is my nitpicking: It is too bad that for Walden Media, maker of quality kids' fare, "Fried Worms" follows hard on the heels of "Hoot." The similarities are rampant: boy moves to a new school, is taken on by a bully with an unfortunate home life, and befriended by an outsider girl of mighty powers. Both films follow the young hero as he realizes his well-meaning parents are clueless (apparently adults drop 20 IQ points when they have kids) and he will have to stand up, not only for himself, but for Right.
The plotlines diverge from there, but the similarities haunt the film. I also quibble with how many kids' films aim to show kids that, yes indeed, moving to a new place will be the worst thing that could possibly happen. Classes are run by bullies, teachers are dingbats, principals blame the wrong people, and normal kids are either absent or cowed. At least neither "Hoot" nor "Fried Worms" has the family turn tail and run, as they did in the remake of "Cheaper by the Dozen." But still, thousands of kids do move every year, and most of the time it can be an adventure, not the kid equivalent of nuclear winter.

I saw Material Girls out of respect for the talents of director Martha Coolidge, and I'm sure she'll find her footing again soon. It's about two Idiot Rich Girls who live on the Party Circuit, a la Paris, Nicole, and Lindsay, but who lose all their money and have to get a clue. Unfortunately, the script is never deeper than the characters (played by Hilary and Haylie Duff), it's clear from the outset who undermined Daddy's company, and the plot doesn't thicken as much as it congeals. The infamous Party Circuit looks dreadful from the get-go, and the Rich Sisters never lose the ewwwww factor--too rich, toot thin, too brainless--even when they have to figure out they've been duped. There are exactly two Upstanding Poor Guys, so the romantic factor isn't exactly a mystery either.

I couldn't help thinking that, even though the Duff sisters have themselves eschewed the club life, just the fact that Hilary went from a thin, curvaceous size 6 in "The Lizzie McGuire Movie" to a skeletal size 0 in "Material Girls" means the zombie culture got her. The whole film makes you think that somehow, unfortunately, for these characters, and for young Hollywood in general, the ewwwww factor has won.

This film has caused more parent frustration than any movie I've heard of recently. Many parents want to see the film themselves, it seems funny, and the kids like Will Farrell from "Elf" and "Kicking and Screaming." And, as I've noted in this very column, PG-13 can mean many things, some kid-friendly, some not.

So how about "Talladega Nights"? It succeeds on its own terms, which is as a message movie that is rude, crude, and socially unacceptable. For many people, this is not a bad thing. This movie is for them. Or for you, if you just want to see a dumb, rude film, and you're not responsible for the language or moral fiber of anyone you've brought along.

I know one family that brought a group of boys aged six to 11, and they stayed through the whole thing, albeit cringing. Another dad brought four girls, ages 7 through 9, and left half-way through. The fact is, the movie purposefully and delightedly goes a step beyond what anyone wants young kids to see and hear. I think Will Farrell and Adam McKay could have replaced a few very specific body-part references, could have just toned the whole thing down one notch, and still pleased the gross-out crowd without horrifying parents. (Please note, I'm talking about parents of pre-teens here). But, it was their movie to make. If you have kids who want to see it, I'd look for the network version several years down the line.