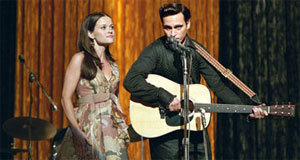 "Walk the Line" is the story of a sinner saved by grace (in the form of June Carter!). For some religious moviegoers, this may feel like a watering down of the gospel that fueled so much of Johnny Cash's art. But it is a film about paradoxes, about believing one thing but doing another. For most of the movie, Cash crosses the line, falling off the wagon and into the arms of addiction. He is his own worst enemy. That may not strike viewers as eminently spiritual. Yet, isn't the battle to choose wisely, to carry through on our convictions, the line we all walk every single day?

"Walk the Line" is about being haunted. Cash lives with guilt, blaming himself for things he didn't do. It demonstrates how the withholding of love, of compliments, can undo even the most acclaimed artists. Johnny Cash lived like a man condemned, a killer on the run. He feels more at home inside Folsom Prison than en-route to church.

While Joaquin Phoenix captures the rock side of Cash's country roots, Reese Witherspoon anchors the film as June Carter. Drawing upon her Tennessee roots, she gives this Hollywood biopic an authentic Southern voice. June and the Carter family accompany Cash through his dark night of kicking his drug habit. Her parents demonstrate their love with shotguns scaring away Johnny's dealers. June is the spark plug that energizes every sequence and the songwriter who encapsulates the film's central tension. Johnny and June both fall into "a burning ring of fire" and desire. Their love for each other ultimately woos and wins them over. Like the love of God, the fire blazes brightly, eternally, but it never consumes them. It just burns, burns, burns.

What a missed opportunity. This fine film gets so much right: Joaquin Phoenix's smoldering portrayal of Johnny Cash, Reese Witherspoon's unexpectedly strong portrayal of June, the high-powered musical numbers, the very look and feel of the thing. All of these help make up for a script that is a little bit flat. But shouldn't a bio-pic include the most powerful elements of the bio? Where in this movie is Johnny Cash's life-long wrestling with God?

Patrick Carr, the co-author of "Cash: The Autobiography" (1997), told the Washington Times that Cash "retained his Christian beliefs throughout his life... He was an absolute believer in the Christian God." When Cash was going through his years of drinking, drugging, and fooling around, he was simultaneously "conscience-stricken and extremely ashamed of himself." If the movie had shown us that interior conflict, it would have added a much-needed layer of complexity to the character.

And how about the following life-changing event? At the end of his rope, having taken "pounds of pills," Cash goes into a mountain cave. He wanders deeper and deeper down the passages until his flashlight batteries burn out. He then lies down to die, figuring no one will ever find him. But then he experiences a thought taking shape inside, a kind of instruction. It tells him that he does not have the authority to decide whether he lives or dies. It's not up to him. So Cash gets to his feet, and, in total darkness, stumbles back out through the labyrinth to the light. It's a powerful and moving scene, but you won't find it in the movie. Nor will you find any other exploration of what faith meant to Johnny Cash. We get only a brief glimpse-- maybe 10 second's worth--of June and Johnny in the parking lot of a country Baptist church, walking toward the open doors. That's it.

The challenging and empowering elements of Christian faith were a strong part of Johnny Cash's life. So why weren't they part of the movie? A film that is subtle in presenting themes of faith and spirituality could well deserve recognition as "Best Spiritual Film"; a film that goes out of its way to avoid those themes does not.