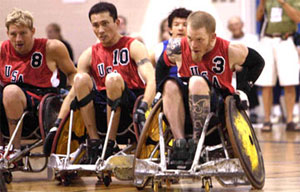 Eschewing the tired clichés about the dignity of suffering, this Oscar-nominated documentary about the lives of paraplegic athletes is refreshingly devoid of mawkishness. The men of this film, devotees all of a brutal, no-holds-barred sport known as wheelchair rugby (or murderball), are no plaster saints; their lovingly detailed descriptions of their pre- and post-injury debauches are enough to make the less hardy among us blush, or blanch. And yet, the athletes, damaged of body, choose to be true to themselves, finding a means of tailoring sport to their now-limited physical capacities.

Directors Henry Alex Rubin and Dana Adam Shapiro tell these athletes' stories simply and forthrightly, unstintingly providing the details of their pasts, their accidents, and their daily lives, leaving out little. To some, this may be too much information on an already-disquieting topic, but "Murderball" refuses to turn away, refuses to take a complex, multi-faceted story and turn it into a Hallmark card. These men are men like any other, and in acknowledging their limitations, both physical and inter-personal, "Murderball" gives them the dignity of seeing their whole selves onscreen. In rejecting the neutering sympathy of the full of body, in making the most of the limited physical resources left to them, the murderballers are quietly, irrevocably moving.

"Murderball," the name given to the sport of wheelchair rugby by its devotees, is played by quadriplegics with varying degrees of upward mobility. They're a spirited and profanity-prone lot of personalities with traits reminiscent of the everyday high school jock, with a few exceptions thrown in to offset the almost palpable level of testosterone. Before seeing the film, my mind invented an inspiring story of hope, an emotional tale of triumph over adversity. Perhaps this is a trick the mind plays on us; we so easily sympathize with anyone challenged by a physical or mental disability that we expect every wheelchair-bound human being to have some kind of tragic or hope-filled backstory. One solid achievement of "Murderball" is its ability to challenge this misconception.
Sure, some of their stories are heart wrenching, but the players on the United States Paralympic rugby team don't want your sympathy. They want to play the sport they love. And right off the bat, a problematic balance is struck between the players and the game, with athletes' stories interrupting the account of a newly injured quadriplegic, sandwiched between footage of intense and violent competition. The most interesting aspect of this combination is the glaring lack of the kind of affecting compassion usually associated with heartbreaking segments on daytime shows like "Oprah" or newsmagazines like "60 Minutes." Absent are the stirring music and emotionally manipulative editing; the men tell their stories--and that's that.
The film does its best to draw on what little humor exists in tragedy, and the athletes' antics--on-court and off--are entertaining and enlightening. But the film's meandering spotlight on the lives of the players and the brutality of game left me wondering: What is "Murderball" actually about? As entertaining as it was, there remained a noticeable lack of meaning. I knew their stories, but I didn't know the men, or the game for that matter.
--By Tim Hayne