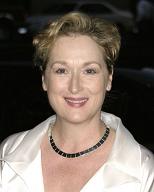 When Meryl Streep received the American Film Institute Lifetime Achievement award, presenter Diane Keaton said, "To be in Meryl's presence is to be on the receiving end of how far she goes in her exploration of the human experience. By putting life before art, Meryl Streep has made the choice of a trailblazing pioneer." These two points show the breadth, depth, and reach of Streep's contribution to film--and to us.

Meryl Streeo is the most celebrated actress of our time, with a record-breaking 13 Oscar nominations and two wins. She received her Master of Fine Arts degree from Yale in 1975. Three years later, in her second film role, she received a supporting actress Oscar nomination for "The Deer Hunter," and a year after that she was nominated again, for her performance as a distraught wife and mother in "Kramer vs. Kramer"--and this time she won. In 1982, she won the Best Actress Oscar for the title role in "Sophie's Choice," in which she played a concentration camp survivor with a devastating secret. She managed to persuade us not just that she spoke Polish but that she did not know English. Her expression as she tried to express herself, searching for the right words, showed her ability to bring complete conviction to a role and to be completely present in each moment. Her honesty and her fearlessness make each portrayal distinctive. Every one is familiar enough to be recognizable, but is filled with insights that make each character fresh and vital.

Streep has appeared in broad, over-the-top, special effects-driven comedy ("Death Becomes Her"), subtle subtext-laden drama ("The Hours"), and three different roles in the television adaptation of a Pulitzer Prize-winning play ("Angels in America"), including a Mormon mother and a male rabbi. She was an amiable soul waiting for assignment in the afterlife in "Defending Your Life" and an Italian war bride in love with a photographer in "The Bridges of Madison County." She has played controversial real-life characters: Lindy Chamberlain, the Australian mother accused of killing her baby, Ethel Rosenberg, who was convicted of treason and put to death, and Karen Silkwood, the technician-turned-activist who claimed that Kerr-McGee's plutonium fuels production plant was unsafe.

Streep's life has exemplified the unassuming integrity she brings to her performances. While she once played an actress who paid a fortune for a formula that would keep her looking young forever, Streep has foregone the usual face-freezing show business cosmetic enhancements in favor of looking authentic and preserving her ability to continue to give beautifully expressive performances. She lives quietly in Connecticut, outside of the Hollywood spotlight, with her husband, sculptor Don Gummer, and their four children, Henry, Mary, Grace, and Louise. She values her privacy, but is willing to use her position to bring attention and gain support for causes such as the use of pesticides on food for children, international human rights, and arts programs in schools.

"Like the air we breathe, the cultural winds in America blow across state lines and county boundaries," Meryl Streep says on her website. "It's vitally important that all Americans have access to a common language in art and music; it helps mend the broken social contract and brings us together in appreciation of the best that human beings can do."