'March of the Penguins' 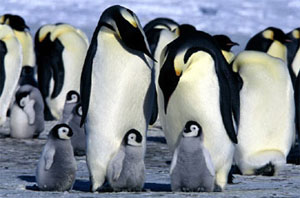 In the race for Best Spiritual Documentary, there was no contest: Beliefnet's community and our panel of experts voted overwhelmingly for "March of the Penguins." The distant second-place winner for both groups was "Mad Hot Ballroom."

Below, you can read our panelists' debate about this film, or you can read what the Idol Chatter blog said about it.

The second highest-grossing documentary ever (right behind “Fahrenheit 9/11”) also was easily the most inspiring documentary in recent memory. No one predicted that “March of the Penguins,” which documents a year in the lives of a community of emperor penguins in the Antarctic, would become celebrated for its depiction of the fragile yet intricate mating rituals of these magnificent creatures. Many conservative Christians as well as others in the religious community have pointed to the movie as an argument for Intelligent Design, and, indeed, it doesn’t seem as if there is anything random about the details of these penguins’ lives as they march across frozen tundra and make enormous sacrifices to fulfill their purpose to bring the next generation into the world.

But the documentary is moving for other reasons, as well. Intellectual arguments aside, there are plenty of other spectacular moments in the movie worthy of  spiritual reflection. The brutal, yet also beautiful, scenery of the frigid Antarctic serves as an awe-inspiring look at  a unique side of creation. The fact that the penguins triumph (for the most part) over these unbelievably adverse conditions, and they do so only by living in close community with each other is just as amazing a life lesson as the interaction between mother, father, and newborn baby penguin is an affirmation of family bonds.  So while in the words of an old Disney cartoon, "There's nothing so peculiar as a penguin, unless it's you and I," perhaps there’s also nothing as surprisingly inspirational as a penguin, either.
--By Kris Rasmussen

A better title for this documentary, which broke box office records in its genre, might be "March of the Poor, Cold, About-to-Die Penguins." This subtle re-titling would alert potential viewers to the fact the movie they are about to see is not the inspirational story they might be expecting. Ostensibly the tale of emperor penguins' commitment to each other and their fight against all odds to bring their young into the world, "Penguins"--directed by the French filmmaker, Luc Jacquet, and narrated by the exceptional Morgan Freeman--is a brutal movie filled with the despair, tragic loss, and death which comprise the life of emperor penguins.

I suspected as I entered the theater to see this movie that, given its National Geographic affiliation, there were sure to be some animal fatalities in it, but never did I dream that every five minutes Morgan Freeman would be warning us of approaching storms and impending penguin peril. The film spares nothing, subjecting us to close-up footage of wailing parents who mistakenly crack their precious egg, literally smashing their hopes for offspring; baby penguins that freeze solid before our eyes; and adults who die in every imaginable way, including starvation, polar bear consumption, and your standard blizzard.

Conservative Christian groups have hailed this movie as a tribute to life, monogamy, and even intelligent design. The monogamy claim is particularly specious: Morgan Freeman clearly explains that the penguins' fidelity lasts only for the span of the pregnancy and birth of the baby, after which they move on to the next cute penguin--making them not the best role models after all. This is spiritual? Not for me; I left the theater thinking, "What God would subject its creatures to such a life?"
--By Donna Freitas

Contrary to the claims made for it by certain fundamentalist groups and journalists, "March of the Penguins" is not a family-values film. In fact, it’s not a very family-friendly film at all, by my reckoning. Conservatives latched on to the familial loyalty and sexual fidelity of the penguins, and while their enthusiasm for the film on that basis was somewhat mystifying (they are, after all, penguins), religion-minded fans of the film may have missed some of the movie's more disturbing theological implications.

The film, after all, takes place over the course of a typical year in a penguin’s life--one filled with hardship, travail, lengthy familial separation, and ultimately, the threat of death, for both the adults and their fragile newborns. More so than celebrating the family nucleus itself (which only stays together for that one brief season), "March of the Penguins" provides an unblinking look at the cruel grandeur of Mother Nature, and by extension (or implication), God. Cynics like myself could make an argument for "March of the Penguins," charming as it may be, as an anti-spiritual film, one intended to rub believers’ faces in the harshness and brutality of the natural world. If we are going to anthropomorphize these penguins, turning them into tuxedo-clad, pint-size Ward and June Cleavers protecting the family hearth, it is equally valid to see them as penguin Beckett characters, wandering a blasted, empty landscape devoid of the parental protection of a deity, left to their own devices in a cruel, hostile world.