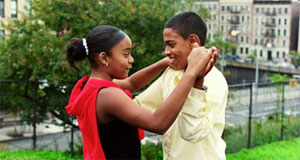 Not since "Spellbound," the 2002 nail-biter that followed eight extraordinary kids on their journey to the national spelling bee, has a documentary so captured the American imagination as "Mad Hot Ballroom" did in 2005. In a style similar to Spellbound, "Mad Hot Ballroom" tells the inspirational story of three groups of New York City public school kids--fifth graders--through their own eyes, as they struggle to meringue, foxtrot, and tango their way not only to the city-wide dance competition finals and the honor of returning home with top honors and a trophy to match. Ultimately, what they get more than anything else is stronger self esteem and better life skills to help them as they navigate their way through the pitfalls of at-risk public school life.

"Mad Hot" has all the schmaltz and makings of a Hollywood-style tear-jerker, but the best part is that these are real kids and not fictionalized Hollywood characters. When you suddenly find your eyes welling with tears, you can console yourself that it's real life tugging at your heartstrings. You can sob along with the broken-hearted boy who didn't make it to the finals, or cheer on one of the devoted teachers determined to make a real difference in each student's life, or watch in awe as the shy boy, Wilson, dances with a grace you will never enjoy.

One of the most touching and memorable moments of all is when Yomaira, a teacher in New York's Washington Heights, reflects on how much hope she has for the kids on her team--while at the same time, she acknowledges the reality that in a couple of years she is sure to see at least some of her students on the streets, having dropped out of school and gotten into trouble. Amid a backdrop of poverty, risk, and lives filled with struggle, "Mad Hot Ballroom" is a story of hope and the real human spirit to be found in the most unlikely kids and in the most unlikely of places--tiny aspiring ladies and gentleman moving sometimes gracefully, sometimes awkwardly, always adorably across a makeshift dance floor.

Forgive me for being a bit dense, but other than filling out the slots in the documentary category, I’m not quite sure what this film is doing here. "Mad Hot Ballroom" is a very enjoyable film, a worthy little brother to "Spellbound," but as far as its spiritual qualities go, I have to profess finding them completely nonexistent. Which is not to say that "Mad Hot Ballroom" was not a finely made film, nor to deny its intelligent commentary on New York City childhood, class, and the noble profession of teaching; merely to point out that its spiritual implications were tenuous, at best.

One notable exception: the touching interview with Allison Sheniak, one of the dancers’ teachers, who bursts into tears at the thought of the change that ballroom dancing has brought upon her 9-year-old charges, seeing them comport themselves like little gentlemen and ladies. At its best, documentary captures something genuine, something fleeting, something that otherwise would have been lost to time, and the vagaries and vicissitudes of recollection; Sheniak’s tears, combining pride and dismay at the passage of time, pull the rug out from under a well-made but mostly dispassionate narrative, revealing a hidden maelstrom of emotion lurking beneath. Spiritual in the sense of revealing the spirit of another, this unscripted moment is truthful and moving in a way those who have seen it are unlikely to forget.

Nonetheless, "Mad Hot Ballroom" rarely penetrates further than skin deep. It finds enough to occupy itself on the surface, in the movement of bodies and the development of young minds, to leave issues of spirit to others. Great film, maybe; further evidence that the American documentary is in the midst of a golden age, definitely; great spiritual film, I don’t think so. If there was an award for Best Material Film, though…