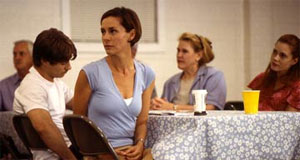 "Junebug," the offbeat dramedy that is part prodigal-son parable and part fish-out-of-water story, offers an inspirational, authentic, and complex portrayal of the spiritual values underlying a dysfunctional family reunion. There is nothing predictable about the way this movie tells the tale of George, a man who takes his new wife, Madeline--a high-end art dealer based in Chicago--home to North Carolina to meet his family.

Though it doesn't take long for ambition and intellectual-chic to collide with down-home, old-fashioned family values, the movie refuses to let us pigeonhole the not-so sharp brother, Johnny, or the innocent, religiously fervent but slightly ditzy sister, Ashley--or even the sophisticated, successful, highly secular Madeline. In "Junebug," no one is the hero and no one is the villain. There are no saints in this story, but everyone is a sinner. As we watch each character wrestle uncomfortably with his or her shortcomings, doubts and fears, grace, hope and healing are found in the simplest acts--a look, a touch, a single word--rather than in big dramatic exchanges.

Another element that makes "Junebug" as outstanding as it is inspiring is the way the film leaves plenty of room for interpretation as to which of the characters have truly connected with their faith, or each other, and which ones haven't. The final conversation of the film between George and Madeline, which takes place as they leave North Carolina, may haunt me forever. This movie could have easily been nothing more than yet another preachy, cartoonish portrayal of fundamentalist faith, but instead, "Junebug" successfully avoids every obvious spiritual cliché we have seen on the big screen, and treats us to a thought-provoking, emotionally satisfying journey worthy of being celebrated.

"Junebug" has some delicately lovely performances, striking and memorable moments, and admirably ambitious themes, but ultimately I found its whole less than the sum of its parts. Whose side are we supposed to be on in this movie? The characters teeter on the brink of caricature and finally fall over.

Our entrée into the story is the ultra-cosmopolitan Madeleine (Embeth Davidtz), a cultured, sophisticated citizen of the world who runs an art gallery in Chicago. This sets up one of the movie’s key themes--the interaction (and failure of understanding) between the urbane and citified and the rustic, simple, and bucolic.

Madeleine impulsively marries George (Alessandro Nivola) without knowing much about him or meeting his family. When she has to go to North Carolina to meet an artist she wants to represent, the couple visit George's family, who live near the artist and who Madeleine has never met. Madeleine does her best to be kind and friendly, but his family is suspicious and unwelcoming, except for Ashley (Amy Adams), the young pregnant wife of his sullen brother. She is fascinated by Madeleine’s exotic charm and thrilled to find someone so gracious and friendly.

George seems to be holding back from both Madeleine and his family, except for one stunning moment, the highlight of the movie, when he steps forward at a church supper and sings a hymn, sincerely and beautifully.

Later, Madeleine is presented with an artificial dilemma, having to choose between a meeting with the mentally unstable artist and being at the hospital for the birth of Ashley’s baby. And then the filmmakers up the ante even further with an amateurish and melodramatic plot turn that has devastating consequences for both Ashley and Madeleine. The film loses the courage of its ambitions and diminishes its open-heartedness with an ending that is crudely manipulative.
--By Nell Minow