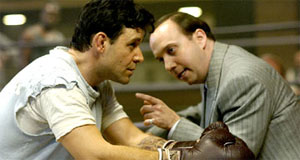 What's so inspirational about James J. Braddock, the "Cinderella Man"? Audiences have already given plenty of love to a movie about a spunky boxer, "Million Dollar Baby," in which Maggie displays her self-discipline and courage. And they already cheered for a Depression-era underdog (under-horse?) fighting against long odds, when "Seabiscuit" thundered down the home stretch. Do we really need another film like this?

What makes the character of Braddock different from those and other tough cinematic fighters is a trait rarely found in athlete movies (or any kind of movie): humility. The shape of Braddock's story may be familiar: a guy who has a modest rise, then a fall, and then a heroic re-ascension. But the kind of guy is different here. He's not the typical adrenalin-charged, top-of-the-world character whom we usually see. Instead, he's modest, gentle, even a touch melancholy. Braddock doesn't pursue boxing honors because he craves fame or prestige; he just wants to feed his family, and undertakes life-threatening work to do so.

This is a twist on the usual sports-hero movie, and a healthy one. When so many films in this genre promote destructive traits like vanity, vengeance, and domination of others, James Braddock, the humble hero, is a breath of fresh air.

The cinematography is burnished, the performances are modulated, the soundtrack swell. So why did the American public leave "Cinderella Man" stranded at the box-office ball? Surely, audiences want principled heroes, who repay their debts? Don’t we want to see spouses stick together for richer, for poorer, in sickness and in health? Aren’t we eager to cheer for underdogs, fighting on behalf of the common man?

"Cinderella Man" demonstrates the importance of not appearing too earnest. Maybe the gap between Russell Crowe’s private life and his portrayal of the decent, hard-working boxer James J. Braddock proved too great; our thorniest actor plays the nicest of heavyweight champs. Perhaps we prefer flawed heroes and crying kids. Maybe the Depression in "Cinderella Man" doesn’t feel great enough. Or perhaps it is so removed from our era of abundance, that we cannot enter into the sense of sacrifice that fueled the Braddock family’s decisions? Maybe we’ve simply seen one too many boxing movies. The movie aspires to be old-fashioned, but ends up feeling old.

I was genuinely touched by the scenes depicting an Irish Catholic church united in prayer around its boxer. The hushed tones that greet Braddock in the Madison Square Garden ring are worthy of a sacred moment. But it feels so stage-managed that it rings false, even if it was true. Sainthood has always been tough to dramatize. Evil seems so much more cinematic. Without irony or subtexts, kind and heroic deeds can descend into boredom. "Cinderella Man" winds up too good to be true.