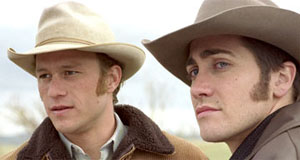 Some movies are spiritual not because of what the characters do or say but because of the film's impact upon the viewer. This is true of "Brokeback Mountain." True, it's a cinematic masterpiece with pitch-perfect performances, gorgeous cinematography, and evocative music, all put together under Ang Lee's sensitive direction. But that's not the reason why so many people are saying that this movie stays with them for days after they see it.

The story follows two gay cowboys over the course of several decades, revealing the pain of hidden and split identities. From the opening scene--when they are waiting to hear about work, Ennis slumping shyly behind his hat, Jack leaning against his truck with an almost brazen friendliness--to the heartbreaking scene toward the end when Ennis visits Jack's boyhood room, the storyline is pulled forward by an excruciating feeling of yearning. This is about more than sexual desire. These characters are incarnating the universal human need for wholeness, fulfillment, and a true love who accepts them as they really are.

All this is conveyed without making political statements or pointing fingers at villains. We find ourselves emotionally engaged not only with the story of Jack and Ennis but also with the reactions of the people around them, who mirror the hatred, fear, ambivalence, lack of understanding, and mystery still surrounding homosexual relationships in our culture. We can't help but put ourselves into this story--and most viewers, we suspect, will identify with more than one character.

"Brokeback Mountain" will evoke your compassion as you confront the deep ache of separation at the center of the story. It is also a cry for acceptance of these lovers who are forced to keep secret an essential element of who they are through the long and lonely years. Buddhist teacher Sharon Salzberg was once asked, "How do I open my heart?" She replied, "Usually, it's broken open." This film will break your heart and open it.

After hearing the buildup and hype surrounding "Brokeback Mountain"—and knowing it proclaims a message different from the covenant I’m bound by—I fully expected to see a movie rich with beauty, deep with passion, and full of the kind of thought-provoking dialogue and characters that would cause me to revisit some of my spiritual convictions.

However, I came away surprised on two counts. First, it contained neither the depth of passion nor the drama of the human condition which would cause me to question and reexamine whether my own spiritual life is lacking in some dimension. Second, it didn’t ask the kind of deeper questions that other important, serious movies--such as “Chariots if Fire” (1981) and “American Beauty” (1999)--asked when combining social commentary with Oscar-worthy qualities.

Almost every movie has a message and an audience it plays to. The genius of movies--from a spiritual perspective, at least--is that they have the potential to take us to the core of what we believe and challenge our presumptions, leading us into a beautiful place of spiritual reflection that is at once both safe and dangerous. To me, Brokeback Mountain found the mediocre middle, which makes for better marketing but not a sense of spiritual depth.

The Academy of Motion Picture Arts and Sciences has a long tradition of favoring films that are propelled as much by their message or social agenda as they are by their quality. “Brokeback Mountain” is this year’s offering in that category. It’s a very decent movie with some beautiful scenes and acting, and has already started racking up the awards. But this film was too muted or understated, failing to provoke the kind of spiritual reflection that is deserving of a Best Spiritual Film award.

In film, as in all art, the clichéd rules of proper comportment are reversed, and it is last impressions, not first, that are indelible. A great film is rendered incomparably greater by a superb, apropos ending; just think of the Rosebud revelation of "Citizen Kane," or “Forget it, Jake, it’s Chinatown,” from 1974's "Chinatown." "Brokeback Mountain," a film that builds from a dismayingly slow start to heights of transcendent beauty, possesses just such an ending (spoiler impending--sorry!). Ennis Del Mar (Heath Ledger), now middle-aged, paunchy, and living alone, is visited by his teenage daughter, who asks for his blessing for her impending marriage. Initially hesitant, Ennis comes around to acceding to his daughter’s wishes, telling her he’d be overjoyed to be in attendance at her wedding. When she leaves, he pulls open the door of his shabby armoire and hugs a blood-stained lumberjack shirt, the only memento he has of his true love, Jack Twist (Jake Gyllenhaal), now dead. Looking out onto the hardscrabble landscape just outside his window, Ennis utters the film’s closing line, “Jack--I swear.”

The faultless finish to a laconic, untalkative film, the line raises more questions than it answers. What is the nature of Ennis’ oath- to protect Jack’s memory? To live in accordance with his wishes? That if the world had been a different place, Ennis and Jack, too, would have married? If you ask me, the combination of elements in this quiet, perfect closing sequence (shirt, landscape, and dialogue) add up to Ennis’ private oath to Jack. Never a talkative man, never one to share his feelings unnecessarily, Ennis keeps the nature of his oath a secret, and in some ways, this secrecy is its most moving aspect. Whatever Ennis has sworn, he has pledged above all not to forget.
--By Saul Austerlitz