If Buddhism Had a Messiah

'The Matrix Reloaded' is a field day for Joseph Campbell types. Does all the religious imagery work?

Beliefnet
Religion scholar Huston Smith tells the story of the Buddha being asked, "What are you?" The Buddha replies "I am awake." Centuries later, so is Keanu Reeves.

Human beings who, like Buddha, see beyond the illusory--who are enlightened--are the rock stars of "The Matrix Reloaded," the sequel to 1999's technoclassic "The Matrix." They wear robes. They intone meditative speeches. They know that what we experience daily isn't real. And they kick a lot of butt while looking really slick in shades.

"The Matrix Reloaded" is crammed with so many religious symbols that Joseph Campbell couldn't keep them straight. Characters with names of biblical and mythological import continue to ponder philosophy between their motorcycle chases and martial arts battles. Reality, causality, chance and choice are all deconstructed--it's no accident that one minor character is named Soren, as in Kierkegaard.

Trinity, Morpheus, the Oracle, and the ship Nebuchadnezzar are back, and we meet new people and things named Icarus, Niobe, Osiris, Seraph, and Persephone. And there is the hero, Neo--half Zen monk, half Christ figure--who has learned that the world he "grew up" in is a computer program created by machines.

But what do all these spiritual symbols and allusions add up to? Is this a Buddhist allegory about illusion and reality or a Christian parable about a Messiah fighting evil? Yes, we know that above all it's just a special-effects-laden Keanu Reeves vehicle. But the moviemakers seem to have aspired for something more. So from a spiritual point of view, did they achieve it?

Some parts of the movie clearly draw on Eastern influence. The "matrix," a computer program that enslaves and deludes all humans, is recognizable as a high-tech riff on the Hindu/Buddhist concept of maya. Eastern spirituality pioneer Swami Vivekananda described maya as "ignorance... a kind of mist that has come between us and the Truth." In the movie, it has fooled all Earthlings for a century.

Unlike every other living human, Neo has managed not just to see beyond the veil, but to pierce it. A bodhisattva who attains enlightenment but continues to be reborn to help all living beings, Neo returns to the Matrix again and again to free the minds of his benighted species. His goal, too, smacks of Buddhism--it's to help people realize what's illusion and what's real.

But the hero who will bring about this Buddhist-style enlightenment is a Christ figure--"the One" to his cheerleaders and an "anomaly" to the malevolent Agents out to get him. Neo performs miraculous healings, receives a bloody handshake from a traitor, and from time to time ascends. He's an iconoclast, literally shattering the statues of gods that might have gone missing from Olympus as he whacks the bad guys. For nail marks, his body has data-entry ports. 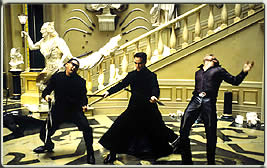 The parallels aren't seamless. Jesus never taught that the world we live and suffer in is fake; he came to save people from sin and pain, not to claim that sin and pain aren't real. If there's a Buddhist-Christian connection here, it's tenuous.

The first movie implied that once you see the Matrix for the lie it is, everything gets easy. At the end of movie #1, Neo seems serenely indestructible. But for all his past success, the star of "The Matrix Reloaded" is a curiously uncertain Messiah. A nightmare-plagued Neo anguishes over how to break down the Matrix and rescue the last human city, Zion. As we wonder what happened to the controlled hero we knew, the religious metaphors crumble. Can we picture Rama or Buddha saying "I wish I knew what I'm supposed to do"? Can we see Jesus telling his followers "We're not going to make it"? They may have had moments of doubt, but weren't nearly as hesitant as Neo.

Even though Neo beat death in the first movie and gloriously resurrected, in the sequel the trials have only just begun. Yes, Neo is powerful--but he's still physically and emotionally vulnerable to the Matrix's violence and deception. In short, he's "still human," as the invidious self-replicating Agent Smith sneers. He doesn't seem to have fully transcended--he can make the Matrix wobble, but it won't fall down. For devotees who like their Jesus or Buddha a little more invincible, this is a letdown.

Of course, if Neo did completely actualize--destroying his enemies once and for all--there'd be no reason for a sequel. But watching Neo continue to battle the system after he's solved the riddle is both anticlimactic and discouraging. It's as if the Romans had continued to hunt Jesus down after he rose from the dead. Once you resurrect, aren't you supposed to get a break?

The more evil dudes Neo quashes, the smarter and more resilient new evil dudes become. You could say that most religions don't work like that--when Jesus harrows hell and tramples down death by death, no one expects that Satan and death will morph into new, more potent forms. On the other hand, Christians would say that Satan survives to this day, continuing to fight us. Eastern spirituality adherents would say that enlightenment is a perpetual struggle. As Buddhist author Jack Kornfield noted, "after the ecstasy, the laundry."

Theologically, the idea of an enlightened hero who continues to struggle is less fun but perhaps more true to life. The logical conclusion of "The Matrix Reloaded" is that enlightenment doesn't end your connection to the world, and may even require further battles. In the movie, the ability to see through the Matrix does not vanquish the Matrix--at least, not yet. In life, the ability to see that certain things don't matter--or to grasp that Jesus has saved us--doesn't mean daily battles at home and at work are over.

So perhaps the movie does get its theology right. In weaving together Buddhist and Christian imagery, it gets at a truth of both faiths. The notion that enlightenment means easy street is actually an oversimplification, as is the notion that since Christ died for our sins everything is a cakewalk.

That said, there's a lot in the movie that doesn't work. For all its religious pretensions, the Matrix still operates under video game rules and is enslaved to standard Hollywood programming agendas. A girl kisses Neo so love can conquer all--and we're not talking about agape love, either. Kickboxing, car crashes, and a cryptic keymaker take up as much time as Morpheus' ponderous philosophical musings. A sweaty dance party and a snooty Frenchman round out the formulae. The Wachowski Brothers are trying to do too much at once, and the strain shows. The finale is an outrageous ripoff.

But some of the movie's spiritual questions ring true as the characters mull whether choice is an illusion and hope a design flaw. Neo himself nears a choice that will differentiate him from past Matrix saviors (surprise, he's not the first). As in the original, it's the mysterious Oracle who leaves everyone guessing. Is she on the side of right or not?

"The Matrix Reloaded" is far from perfect--indeed, in many conventional ways it's just a bad movie--but it does raise religious issues that few films address. We'll have to wait until the final installment to see if the truth will set the Matrix crew--and moviegoers--free.