The comedian talks about comedy, Christians, and talking to God.

Andy Dick came to our attention as the quirky reporter Matthew on the 1995 sitcom "News Radio." In 1999, after the deaths of his respected co-star Phil Hartman and friend Chris Farley, Dick smashed up his car, pleaded guilty to drug possession, and went through a drug program, where, he has said, he began talking to God. Since rehab, Dick has been as busy as anyone in Hollywood, appearing in a dozen movies, and creating "The Andy Dick Show" on MTV, which Rolling Stone called "the funniest thing on TV." As Owen on the ABC sitcom "Less Than Perfect," Dick builds on his "News Radio" persona of a gentle, lost soul, but one ready to snap at the most unlikely provocation.

In private, Dick is thoughtful, thankful, and serious about his spiritual search. He claims he's helped in this by his  co-stars Zachary Levi and Sherri Shepherd, both well-known in Hollywood's Christian circles. Called a comedic "saving grace" in this interview, Dick appears to be looking for some grace himself.

This interview originally appeared on Beliefnet in 2003.

What is Andy Dick’s definition of comedy?
Whatever makes you laugh.

What makes Andy Dick laugh?
I have a very dark sense of humor. I laugh when I see people in pain. Sometimes I think it is a defense mechanism from childhood, where you're in so much pain you have to laugh. It is a survival mechanism.

Over the last 20 years or so, comedy has gotten a lot more vulgar. Can comedy be clean? Does it have to be dirty and rude?
Yeah, I go there a lot. But I don’t think you need that. When I go there, it's to shock people. A lot of times people laugh because they are uncomfortable. . . . If you really look closer, there is pain involved. There is something that is painful that someone else can relate to. It is kind of a laugh out of recognition. Like, "Ah, I've been there."

It terms of being vulgar, I don’t think you need to be violent unless it's slapstick, violence to your self. That can be funny--we've all tripped and fallen on our faces. To be vulgar or nasty isn't needed. It's almost easier to do that. You have to be clever to not do that.

Do you think vulgar comedy has peaked?
It will always be around. Again, the vulgar stuff is easy. The subtle, more slice of life type of stuff, you have to be smarter to come up with that stuff. The people who do both or stay [subtle], they'll work longer. Why do you think Bill Cosby has gone from TV show to TV show to TV show? 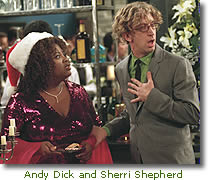 Tell me about your religious background.
I grew up Presbyterian, just a basic Protestant upbringing. There were years in my life when I would go to church every Sunday and to Sunday school. Then I just phased out of it. I believed in God my whole life, and then strayed away from it in my teen-age years, until recently.

Luckily, I always maintained a dialogue with God, especially in my darkest hours. You know it is like that footprints poem. It really is like that for me. When I was at my worst—I really am trying not to cry right now—I was really in contact with God, just praying with conviction to just please get me out of this.

I find it harder to pray when everything is going great. I try to be in that attitude of gratitude. That is what I love about this show ["Less Than Perfect"]. I love having [co-stars] Sherri [Shepherd] and Zach [Levi] here. If you notice, my dressing room is sandwiched between them. I am protected, surrounded by angels from heaven. They're here to help me. I actually struggled through the first part of this season. I've been on shows that have not been so good for me, that wound me up in that dark place. So I came in here apprehensive, like, "Here comes another one!" The last time I was on a show for five years, I went to rehab twice.

It has been the opposite here. I have these two angels protecting me. And we pray before every show. Just to have people like that around you brings you up to that level. I went to church with both of them. They took me to the Oasis Christian Center, which is great. I love it.

So are you saying you are closer to God now?
I've always been with God, even in my darkest hour. That is why I say I am alive. I mean, I should have died a number of times. But now I'm at a place where I can be of some service. When I was at my darkest place it was just like, "God help me. I can’t help myself, yet alone another person." Now I'm back on my feet, levelheaded, grounded, thanks to God, thanks to the people around me.

Do you consider yourself a Christian?
Yeah. My dad never went to church, but one day he started coming with us, and I said, "Can I ask you why suddenly you're going to a Christian church?" He was studying a lot of religions--Judaism, Buddhism, he was meditating... He said for him God was God and you can access Him a number of ways. That was really powerful to me.

You've done some pretty outrageous sets, what some people would call sacrilegious.
You're going to mention the time I pretended I was a Christian comic. Before I was known, I would go on stage and pretend I was other people. Once I pretended I was mentally handicapped. It was really wrong. One time I was a bad magician. And one time I pretended I was a Christian comic. I came on and I said, "I am a Christian comic and I'm going to make you laugh just as much as the next guy, but I might have a side message underlying it." Then I did this horrible comedy, and what happened was, I had a slight case of Tourette's, so I would start doing a joke and I would be like, "Get out!" I would do this totally anti-Christian swearing. People thought it was really happening, because I wasn't known yet. And no one was laughing, they were legitimately concerned and freaked out. Back then it really turned me on to freak people out. 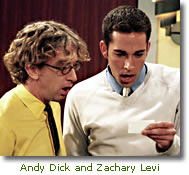 Besides getting a laugh, was there a point to that?
No, no, there was no meaning. I've never actually seen a Christian comic. I don’t care if you're a Christian or an atheist. I'm not out to offend Christians or make fun of Christianity. I put it out there and people make up their own stuff--it is really their issues. There are atheists and there are Christians and there are people in both groups who are a little too heavy-handed. It's comedy, just lighten up. We're just trying to be funny.

Do Christians have a sense of humor?
Heck, yeah. In every group there are people who are funny and people who are just serious. The ultimate is when you make people laugh, but they are left with something to make them reflect, or to move them--to really affect the quality of their lives in a positive way. Sometimes just the act of laughing does that. That's why I don’t try to have a message. If they are laughing, they're being affected in a positive way. Sometimes, to get to people who are real lost, you have to almost shake them up. You just lighten them up a little bit, and maybe they are on their way. I'm candid in order to get to those people, cuz I have been in such dark places.

I mean this stuff. People don’t know that about me. They just think I'm a freak. You cannot be this successful without having God on your side.

Some comedians say their talent is a gift from God.
Oh yeah, but you can squander that. It is totally my God-given gift and I say, "Dear God, please let me be an empty vessel to do your work. This is all you. Thank you."

Then I can relax, because if the show falls flat, it is God. I am serious. You can look at it as a cop out, but really I look at it like I have somebody big watching my back. Seriously. And that is why I kick ass. I kick ass because it is not just me. It is me and God.

Do you read the Bible?
No. I don't know the Bible well, but I quote it a lot. I have people around me--I do this on purpose--I have this guy Declan who is a living Bible. It's like walking around with a giant Bible next to you. Everything that goes on, he has some quote, then I find myself quoting that.

You've obviously been through a lot. Do you want people praying for you?
Yeah, don’t you? I really do. I think it's wise to have and it's why I am kicking butt. I was sober for three years and when I started getting in my own head again, started getting real dark I had Sherri pray and Declan was in Europe and he got this convent full of nuns to pray for me, and whatever happened, I had a turnaround, like a 180. I cannot even describe it. Incredible.