Beliefnet
As the hearse glides up to a stoplight, three kids about 12 years old start jumping up and down on the corner. They point, wave, and laugh hysterically. One of the kids steps off the curb and plants his face on the rear window. He sees me. I am lying on my back in an open coffin, propped up on a big fluffy pillow. I turn my head to the boy and salute him. He throws his hands in the air and shrieks with delight.

This is no dream, nor my nightmare. I am riding in the back of a flamingo-pink hearse, laid out in a pink coffin, both the property of the Dying-to-Get-In company. From my corpse's-eye-view of downtown Port Washington, N.Y., I watch as we elicit stares and honks and literally stop traffic behind us. The theory behind the company, launched last February, is that I'm learning to laugh in the face of death, but so far the spectacle we've created is teaching me more about handling others laughing at me. 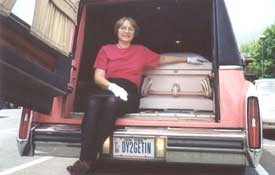 Dying-to-Get-In is the brainchild of Gerri Guadagno and Gayle Stimler. In addition to offering hearse rides for all occasions, from retirement parties and proms to airport pick-ups and "even funerals," Gerri and Gayle create customized funeral urns and conduct YOU-logy workshops--self-discovery seminars where participants learn, among other things, how to draft their own eulogies. The two also arrange fun-filled cemetery tours and offer unique ways of dispersing your loved one's ashes, including the "Up, Up and Away" (send a "smattering of ashes" skyward, their website offers, with a cluster of personalized helium balloons) and the "Surf & Turf Combo" ("scatter at sea and save some for land").

On Gerri's business card is inscribed: "Faux Funeral Cortege: Experience It AND Live to Talk About It!" Gerri and Gayle, both in their 40s, met at a women's support group in 1992. They say whatever comes across their minds and laugh easily. What made them start Dying-to-Get-In is a simple belief that the key to enjoying life is to adopt an irreverent attitude toward death.

My first question for Gerri was why someone would want to tool around in a hearse. "There's such a stigma about death in our culture," replied Gerri, her voice bubbling with excitement. "We can't even talk about it. And what makes us more uncomfortable than the sight of a big old gloomy black hearse? Well, nothing takes the sting out of that more than a big old fun pink hearse. It's a hoot! Plus," she added, "a ride in a hearse is something very few people experience while they're alive."

While I was mulling her last comment, she convinced me to come take the pink hearse for a spin.

The house was a cinch to find, just like Gerri said. "Just look for the pink hearse out front!" she said. Sure enough, there it was, as hard to miss as an adult elephant. Besides being friends and business partners, Gerri and Gayle, both divorced, are roommates who share a cramped but cozy apartment with two cats above a thrift shop in Port Washington. ("We're partners, yes," Gerri said, "but we're not 'partners' in that sense. Just in case you wondered.")

Gerri finalized her divorce in December and marked the occasion by legally changing her name from Gerry to Gerri. "That 'i' is significant," she said, "because from now on it's all about me."

Sitting in their living room, the two women have the antic, slightly edgy glow of Thelma and Louise, set in Long Island and crossed with, say, Abbot and Costello. If you haven't experienced Long Island womanhood, think, especially in the case of Gayle, of Mike Myers' "Saturday Night Live" character Linda Richman, the one who gets "verklempt."

"A few years ago, I was thinking about my life and my understanding of death," said Gerri. "And I thought, when you're gone, what's left of you? For most, it's just a plaque in a cemetery that bears a name and two dates. And what do we know about their lives? Nothing. Only that it was a dash between two dates. I find that appalling. I decided I want to leave a stronger statement about who I was."

"First, I realized I don't want to be interred," Gerri said. "I want to be cremated. So then it's a question of what to put my cremains in. A bronze urn? Sorry, I am not a bronze urn. Well, one day I was in a Kay-Bee Toys store, and I found the solution. It was a novelty item. This little toy box that when you press a button, a voice shouts, 'Excuse me, excuse me, excuse me! Can you let me out of here?' Perfect! I decided I would build a large crate--a multi-material thing, involving various types of wood and ceramics--in which to place my ashes. And the voice, my voice, will say, 'Lemme outta here!'"

"Oh, oh!" cuts in Gayle, leaning forward on the couch. "And it must--simply, must--have your laugh! That would be absolutely fabulous."

When I ask Gayle what her final resting place will be, she sighs thoughtfully. "Mine keeps changing. But I've got time, hopefully. One idea is a box of Crayola crayons. Because what best expresses who I am is the notion that if life isn't the color you like, well, pick another color. If you don't like the tree-green, fine. Make it blue. There's no such thing as 'you can't.' No such thing as impossible. Life can be anything you want it to be."

"I could also do something with a pair of sparkly red shoes like Dorothy's in 'The Wizard of Oz,'" Gayle added. "Those shoes become her tool for self-discovery and give her the power and freedom to decide her own fate. At other times, I think, it's not Dorothy's shoes that best express me. It's a nice pair of red stiletto heels!" Gayle said, laughing uncontrollably.

Talk like this is how Gerri, a graphic artist, got the idea of turning customized funeral urns, or "statements," into a business. Students of the three-day, $750 YOU-logy workshops undertake exercises aimed at helping them "explore and re-connect with the person they've always been--before the hardships of life and work intruded, blurring everything."

So often, Gerri said, a person dies, and all the living can think to say of them is, "'She was a good person, or he was a successful businessman.' How depressing! We're so much more than that." Students are then taught how to express, "celebrate," their essential selves. "It doesn't always have to be a cremains container," Gayle said. "It can be a poem or an essay or a collage."

One student chose to express herself through a miniature metal shopping cart. When she's cremated, her ashes will be placed inside the cart in a shopping bag marked, "Shop Till You Drop." "And until she dies," Gerri said, "she can display the cart on her coffee table. Talk about a conversation piece!"

Another student decided on a handheld vacuum cleaner. "He was very sick and has since passed away," Gayle said. "And on his statement, he wrote, 'Death Sucked the Life Out of Me.'"

"Everyone has a different perspective," Gerri added. "For some, the glass is half-full. For others, it's half-empty. Either way, death is a fact of life we all have to come to terms with."

For $2,500, Gerri will create a "statement" for you, as she did for a woman whose father recently passed away. "She e-mailed me the request but didn't tell me much about her father except that he always hung out at his neighborhood bar in Far Rockaway. She said he loved Jack Daniels and always believed, 'There's no party without Jack.'" The daughter wanted the celebratory urn on short notice, in time for the man's wake, a festive Irish wake, to be held at his favorite bar.

"That's all she told us," Gerri said. "So I thought and thought. Finally, I realized, why not a big bottle of Jack Daniels!"

Gerri managed to secure a rare, three-liter bottle of Jack--"just big enough to hold a glass insert containing his cremains."

Gerri and Gayle delivered the bottle to the wake in the pink hearse. When they pulled up, a crowd awaited them outside. Presented with the bottle, the daughter was shocked. "She loved it," Gerri said. "She was thrilled! She said there was nothing more personal, nothing that could have better captured who her father was."

Then it was time for my joyride in the hearse. Somehow, all our talk about death and remembrance made the prospect of reclining in a pink coffin, just for the fun of it, seem oddly less eccentric. Still, as Gerri held open the rear door for me, the creep factor hit me. It wasn't my mortality that got me; it was everyone who preceded me. The secondhand 1983 Cadillac De Ville had previously been owned by a Queens funeral home and had ushered thousands of dearly departeds to their final resting place.

I paused. Perhaps sensing my hesitation, Gerri said, "Sorry there's no music in the rear. I'd like to install a stereo," she said, with a straight face. "Gloria Gaynor's 'I Will Survive' would be perfect back there."

I looked at her, laughed, and climbed into the coffin.