Millions of souls have offered to be born during this time to help usher in this new era which, after much growth and change, will foster a new world of love, tolerance and joy. 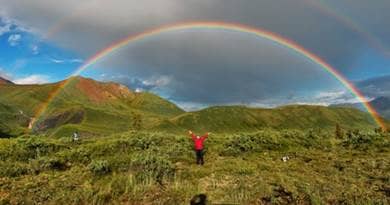 We are moving into a new age. Many are feeling this new energy and seeing the results of these transitions all around us. Millions of souls have offered to be born during this time to help usher in this new era which, after much growth and change, will foster a new world of love, tolerance and joy. There’s a good chance that you are an Indigo yourself or have given birth to a Crystal or Rainbow child. What does this mean for you?

Indigo souls are so named because they have so much dark blue in their aura. They incarnated from 1900 – 2000 with the majority arriving in the 1960’s and 70’s. Indigos are feisty, ready for change, rambunctious, and intuitive. They have come to this earth to break down old paradigms and outmoded belief systems. Look at what’s occurred in our world since the Indigos arrived – the Civil Rights’ Movement, the Women’s Movement, the Rock and Roll Revolution, the Gay Rights Movement just to name a few of the changes they’ve helped foster. As children, Indigos can often be difficult to raise. They have high energy, quick anger reflexes and intolerance for lying. An Indigo can always tell if someone is lying, so as a child if a parent lies to an Indigo, this will do severe damage to their ability to trust. Many Indigos have been labeled ADD and ADHD as a result of being misunderstood. They simply have come to Earth on a specific mission and they are ready to get started now! They don’t like authority, will question everything and prefer to work alone or own their own business. Indigos definitely march to their own drummer. Even as children, they will express a unique interest in all things spiritual. They are highly intelligent, very perceptive and have natural psychic abilities. Their mission on Earth is to break down outdated thought patterns, to shake people awake to the truth and educate their peers about love, forgiveness and tolerance.

The Crystal Children began incarnating in the 1990’s, although some “scouts” arrived in the 80s. The Crystals are most often recognized by their large, luminous eyes. They are called Crystal Children because their aura is opalescent or crystal clear in color. The Crystals are here to build a new foundation of love for the Earth. The Indigos have knocked down the old order, so now the Crystals are moving in to lay the foundation for a new way of living – one that is centered on love. As children, Crystals are very easy going, happy babies. They may have sensitivities to food and clothing. Many Crystals have food allergies, develop rashes, dislike certain material and are picky eaters. This is because they are vibrating at such a higher energy than the rest of us, so when they eat food with harsh additives or wear clothing made out of rough fabric, they can feel it more intensely. Crystal Children are naturally telepathic; they can read and send thoughts. Because of this, many Crystals have delayed speech with a majority waiting until age 3 or 4 to talk. They are very cuddly, communicative and caring. Crystals are kind, loving and sensitive. They are intelligent, natural healers and gifted psychics. They love to give spontaneous hugs. As children, they will say very deep words of wisdom and will be drawn to all things spiritual. Crystals love playing with rocks and stones. They love nature and have a deep connection with animals. Their mission on Earth is to build an energy of love and acceptance.

The Rainbow Children are so called because their auras reflect bright rainbow colors. They are amazing souls who have never incarnated on Earth before. They have no karma, no past baggage. So they come to this Earth fearless and trusting. Their focus is on service. They will never incarnate into a dysfunctional family. Most Indigos choose to incarnate into dysfunctional families because this helps build their feisty independence. Most Crystals need at least one parent to be an Indigo. But Rainbows insist on being born into happy, functioning, healthy homes and prefer to be born to Crystal parents. They began coming to Earth in the year 2000. They are happy, joyful babies – no colic here. Many refer to them as Earth Angels because they never think of themselves. They are completely joyful and focused on helping others. They have high energy and love bright colors. Very few Rainbows have incarnated so far, but we should see more coming in the upcoming years. They are confident without being aggressive and have a very balanced female/male energy. Their mission on Earth is to usher in a new era of unconditional love.

In order to speed up the positive changes that are coming to earth and help deflect much of the negative energy we see all around us, many Indigos have offered to transition into Crystal which in this incarnation. This is an amazing phenomenon. Most souls make difficult transitions like this in the peace and security of the other side. But for the feisty, independent Indigos, they enjoy and welcome a challenge.

If you feel that you’re an Indigo and have been feeling very out of sorts for the last year or so, you might be an Indigo in transition. The following are some common signs: increase in psychic ability; increase in anxiety; periods of zoning out; needing to rest more than you’re used to; anxious about humanity and the state of the world; difficulty coping with everyday life; disrupted sleep patterns, waking up several times a night or at the same time each evening; experiencing a range of bodily sensations such as an increase in headaches, back and neck pain, extreme fatigue and knee pain; feeling dizzy and spacey. If you are experiencing a majority of these symptoms, you might be going through this transition. Many intuitives believe this transition can last anywhere from 1 – 3 years. The physical sensations are caused by the increase in your energetic vibration which facilitates the release of years of toxins. Try to surrender and accept these changes. Be gentle and nurturing to yourself. Spend as much time in nature as possible. Drink plenty of water, get lots of rest, stay grounded and keep your energy focused on all things positive. Take media breaks, so your conscious isn’t saturated in negative news, watch funny movies and read uplifting books. Take heart because all this means is that you’re soul is increasing in its own journey to the light which in turn will help light up the world.

Samantha Fey is an Intuitive Medium. Check her out on-line at www.thecrystalchick.com and listen to her weekly podcast by going to www.blogtalkradio.com/psychicteachers.