The former child star and his wife on that notorious 'Celebrity Fit Club' scene and their hope for the Christian community. 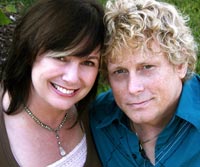 Actor Willie Aames, best known in his younger years as Buddy from "Charles in Charge" and Tommy on "Eight Is Enough," later as the Christian superhero "Bibleman," and most recently as the "biggest loser" on "VH1's Celebrity Fit Club: Bootcamp," has written a memoir about his journey as a Christian. "Grace Is Enough," which he co-wrote with his wife, actress Maylo Upton-Aames, reveals the couple's ups and downs and how faith helped them overcome drug addiction and other self-destructive behaviors. Beliefnet recently spoke with the couple about growing up around occult activities, Willie's "incident" on "Celebrity Fit Club," and Maylo's battle with lupus.

The book describes what seemed to be your attempted suicide at three years old. Tell me a bit about that. What do you think might have led you to that point?

Tell me about the incident on Celebrity Fit Club.  What happened behind the scenes?

It takes a lot for me to get to a point where I get  really angry. [On] Celebrity Fit Club we had guaranteed the network four days a month to work on that show. At the same time that I was doing Celebrity Fit, I was also writing the pilot for my daughter's new series, "The Public Life of Sissy Pike."
When Jani Lane [lead vocalist for Warrant], who was on Celebrity Fit Club, overdosed, they asked if I would take over his work as well. I said, "I'd be happy to, I'll help him out."
I had worked some five days or seven days in a row extra for them to get all of this work done. And in doing so, I put off my responsibilities to write the script. I was getting pressured heavily by Thomas Nelson to get that script in, or they would pull the plug on the show.
At the same time, my wife Maylo has lupus, and with all of the stress and going back and forth, she was in the middle of a pretty heavy flare-up and had a very high fever. Many times when that happens, she ends up in the hospital.
I had been home less than 24 hours, had spent that entire time writing. When [the TV crew] came to the door, you didn't see me asking them very politely three or four times to please go away. My wife was ill. I'd been up all night. It was an inappropriate time, and I needed to get some sleep and be left alone. I had just completed more than my obligation for them.
What you saw on television really was the last point of where I had finally just had enough of them ringing the doorbell over and over at 6:30 in the morning. I had a Rottweiler that was going absolutely crazy. Prior to my even answering the door, I had no idea who it was. As Bibleman, I had my life threatened 12 to 15 different times. When somebody comes to your front door and they're screaming obscenities at you and telling you to come outside and you've had your life threatened several times, you take it pretty seriously. It's the reason I have a Rottweiler.
When you discover that what it is a camera crew thinking that they're funny and your wife is almost [not] ambulatory at that point and they won't leave you alone, that's when I got angry. I acted the way I acted and it was not a pretty thing. I was frustrated. I was cornered. If I'd called the police, that would have looked even better for them.
Then what happened?
The backlash is what really threw me. It went on and continues to go on to this day—about what a disappointment as a Christian man I am, what a disappointment, as a celebrity I am, and what a disappointment as a role model I am.
I was extremely blown away that anybody would care, in the first place.  I was completely taken by surprise at the reaction—primarily from my Christian brothers and sisters in the community—where after 10 years of solid service as Bibleman and [my] family sacrificing, it was suddenly all thrown away over two minutes worth of edited footage.