Mira Nair: The Lessons of Our Parents 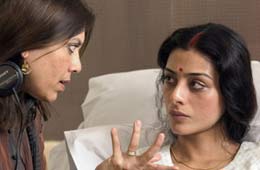 Director Mira Nair and Tabu on the set of "The Namesake"

Watch a clip from Mira Nair's "The Namesake"

When filmmaker Mira Nair came from India to the U.S. three decades ago, she burst onto the scene with her first feature, "Salaam Bombay," a harrowing story about lives of street children in India’s commercial capital, which received an Academy Award for Best Foreign Language Film. The director has gone on to make hits like "Mississippi Masala," an interracial love story, "Vanity Fair" starring Reese Witherspoon, and the huge art-house hit, "Monsoon Wedding."

Her latest Hollywood offering is "The Namesake," based on Pulitzer Prize-winning author Jhumpa Lahiri’s book. It’s a tale of dislocated first-generation Indians and their U.S.-born children who discover themselves and learn to live between two cultures. Nair spoke with Beliefnet about realizing the wisdom of our parents, the alienation that Christmastime can bring, and how yoga centers her life.

Why did you make "The Namesake" at this stage in your career?

In Hindu philosophy we have four stages of life, and I think I am definitely in the cusp of my second and third stage, [which is] the householder and karma yogi. And I think that at least many films I make mirror are directly in response to my stage in life. This is only in hindsight--it is not like I was planning [it this way]. I think these last few films have been so strongly about family, because that is my complete immersion--as a wife, as a mother, but also as a daughter-in-law and as a daughter.

I was not looking to make a film about immigration, and I don’t even think of myself as an immigrant. I hold an Indian passport. And I actively live in the global space.

How did you discover Jhumpa Lahiri’s book, which is the inspiration for the film? What made you decide that it should be a movie?

In December of 2003 I lost my mother-in-law as a result of complication from surgery for ovarian cancer. It was a botched surgery held a couple of days before the long Thanksgiving weekend. We had called her here from Uganda. I had hired an ayurvedic cook. We were not expecting this death.

With Ammy’s death it was the first time I entered in that zone of really, palpably feeling that we are not immortal, that everyone must go. It was the first time for me to directly experience the finality of loss. A few weeks later on a plane journey to India I decided to read "The Namesake." It just grabbed me. It was as if I had been understood. I had found a person, Jhumpa, who had put into words everything that I had experienced and was experiencing. It was like a something you come back to for comfort, because it was amazing not to feel alone in that suffering.

So first I was propelled to make this film after we buried my mother-in-law in this country, and she had no relationship to this country. And re-reading the book gave me the kind of banquet that I love in my movies. But there are other connections too. The story starts in Calcutta and ends in New York, and I have lived in the two cities.

Jhumpa’s novel was hugely popular. What was the essence of the story for you?

The film to me is tale between parents and children, and how as children we have to forget what our parents are--and then realize what they have done for us. For me the realization came when I became a parent as to how much my parents put up with me. I think the story is about the fact that the family is the greatest refuge we have, how part of growing up is forgetting that and then remembering it.

Also the film was made out of the need to make a really good family film. Every Saturday I take my 84-year-old father-in-law and 15-year-old son to an outing--usually a movie. And it is really difficult to find a movie that doesn't insult one or the other. And so this was consciously made for people of all ages and for each one get something out of it.

I was attracted to the love story in the book--the connection between Ashoke and Ashima (played by Indian actors Irrfan Khan and Tabu). I wanted to capture the stillness of our parents' generation. If you have a cup of tea, you only have a cup of tea. You do not talk to each other. You do not multi-task. That kind of stillness is a very rare quality.

Our parents' generation had everything we have, but it is just a different language, and it is deeper than any language we know. I was interested in people who are strangers and who fall in love versus today's lack of courtship--of how you fall in love or fall in lust. It is such a different style. I believe romance must have been far more acute in their generation.

You are raising your son in the U.S. What have you learned from that experience?

Living with a 15-year-old really informs me how an adolescent should be. The impatience, the rhythm--that is a very American thing. In our house we say adolescence is a western word. We don’t believe in it. When [my son] misbehaves, we call him "Ado," (short for adolescence). We say adolescence is just a new phase. I brought in a lot of understanding of adolescence into the film.

Tell us about your personal experiences of living in the US, especially your early days when you arrived in this country. How did you find the culture and the customs? Are those feelings reflected in "The Namesake?"

Even though I have lived here for many, many years, Christmas still alienates me. Christmas lights may be the loneliest thing for me, especially if you mix them up with reindeers and sleighs. I feel alone. I feel isolated. I feel I do not belong. And so when I was framing the scene in which Ashima learns the news about her husband, and she comes running out of her house into her garden, and it night time and cold--I wanted the Christmas lights.

We had so many festivals at home in India. I recently had a Holi party and it was snowing in New York. And Holi is supposed to signify the end of winter and the beginning of spring. We are used to so many kinds of celebrations, but Christmas was something I did not have any association with. So for me that is a lonely moment, and I used that to heighten Ashima’s isolation.

Then there is this image of Ashima in her sari hauling her laundry cart in the snow. It reminds me of when I came to the U.S. It took me three years to learn to dress in the American way, especially in winter. That was just like me. I barely wear socks even now.

Your life is very busy. You finished one film and already you are working on "Shantaram" with Johnny Depp. How do you balance all of this with being a wife and a mother?

I actually keep a very humdrum, low-key life when I am at home. I work in the office from 10 to 5, and then I go for yoga three times a week at the Iyengar Institute. And on Sundays we take a private yoga class at home with my husband and my son. It teaches me to embrace the world literally upside down and to embrace disorientation. I get a perspective to look at the problem or to look at the situation from different ways. Yoga also brings calmness in my life. That is how I keep the stress at bay.

We always eat a home-cooked dinner. We have policies at home, like both [my husband and I] never travel at the same time. We have three generations at home, including my father-in-law. I keep a very low profile, and a lot of things I do are very much with the family in mind. I have actually made films with the family around me.