Jane Seymour on Living with an Open Heart

The veteran actress talks about her spiritual life and her near-death experience. 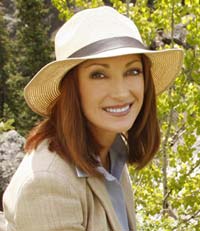 Whether you know her as Bond Girl Solitaire ("Live and Let Die"), the pioneering Dr. Michaela Quinn ("Dr. Quinn, Medicine Woman"), or the oversexed Kathleen Cleary ("Wedding Crashers"), actress Jane Seymour will most likely leave an impression on you. Seymour, who has a knack for portraying diverse characters with ease, will be starring in the Hallmark Channel TV movie, "Dear Prudence" on Saturday, August 23, in which she plays a talk show host who doles out household advice and works to help solve a murder. Seymour also recently released a line of "open heart" jewelry through Kay Jewelers.

Seymour recently spoke to Beliefnet about her own favorite cleaning hints and her appreciation of Native American culture.

You play such a multi-faceted character in the movie--a talk show host who gives out household advice and tips, and then you help investigate a murder. What was it like playing a character with such diverse talents?