A Shine of Rainbows

Connie Nielsen gives a heartfelt performance as the kind and patient Maire O'Donnell in the new movie "A Shine of Rainbows" - now out on DVD. Alongside the talents of Aidan Quinn and young John Bell, this story, set in Ireland, follows a young preteen that's trying to find his place in the world. While his newly adoptive parents (Nielsen and Quinn) react to their new son in different ways, the film shows that sometimes people can find hope in the most unexpected places. Be sure not to miss this delightful family film.

Jana Melpolder: I recently watched "A Shine of Rainbows". It was a very heartwarming story and I really enjoyed it. What originally drew you to the script?

Connie Nielsen: It’s not often that there are stories that are about motherhood and in a way that I feel really, truly speaks to the kind of feelings that are involved with motherhood, but also the kinds of lessons that are involved with motherhood. Often times they also turn out really sort of sentimentalized whereas here I thought that they used beautiful metaphor. Here is someone who is adopting a child and wishing to give out all of the love that she feels for the world. And she chooses this little guy because he’s the one who can use it the most. And there is just a wonderful way in which she teaches this child to stop being afraid, to stop being scared of life and people by showing him beauty in this world through the love of nature and the love of color. And that I thought was a very apt metaphor for what it is like to be a mother: where you do try to show the beauty of the world and you try to make them strong, the children through this love of the world. I just wanted to be a part of doing that.

I also thought that the story had the potential of teaching compassion to children, especially tweens who I think this film is the best directed at. There is a child here that you cannot help but feel compassion for and it’s my hope that parents will use this film to open a conversation with their tweens about compassion in schools. How to not be a part of the children who attack weak children to make themselves feel stronger inside the social network, but instead will feel compelled to protect the weaker in their mists.

JM: That’s a great point because bullying is certainly a topic of conversation today.

CN: And it should be, you know almost daily. I think that there is just not a moment that you can waste to make sure that your children are doing the right thing in school you know.

JM: Exactly. How were you able to identify with this character?

CN: Well I have four children to start with. So being with children is something that I fully identify with. Two of my children are children from my husband’s first marriage and so they’re not my biological children, but I’ve had the lovely experience of getting to love them as if they were my biological children. And in such I really identified again with my character. I also just have a great love of nature and I really felt that and the character as well.

You know, John Bell is this amazing young actor who plays my son in the film and that was his first film. He is an absolutely incredibly talented guy. So I definitely wanted to make sure people take a note of this young actor. He is absolutely, tremendously talented. He’s truly gifted, this kid.

JM: What is he currently doing right now?

CN: He’s doing a TV series in England. He’s definitely busy. He’s coming out with a lot of stuff. And he’s so young. So I expect you will be seeing him very soon.

JM: I’m sure we will. I understand that to play your character you want to make sure you used the right accent and dialect. But the coaching was done over the phone, which was really interesting. How did you overcome that challenge?

CN: Well through the very, very, very talented voice coach Brendan Gunn who taught me how to speak Irish. [He] is truly talented and he was absolutely unflappable and calm and through his calm I guess I became calm. I kind of started to trust that I could indeed learn this stuff by telephone. And I did.

JM: That’s incredible. What was it like to film in Ireland?

CN: It was pretty spectacular. It’s almost incredible. You just see this green color everywhere. It literally looks like everything. You know, [when] you put down a handful of dirt somewhere, within a week it will be covered with grass. I’ve never seen anything like it. It’s really, really fertile and beautiful. It’s in an extraordinarily beautiful corner of the world and it’s completely unspoiled.

JM: If you were to compare all of the roles that you’ve played in your career which one has been the most inspirational to audiences do you think?

CN: Well it really depends. I get so many different—I get so many different letters and so many different sorts of reactions from people when I met them so I just really think that it’s not me its whoever that person is. It’s whatever spoke to them in different ways because I can tell you that it’s very varied. You know there are people who think that the journalist that I played in "The Situation", whoever did see the film, that they had a strong connection with that. Like people who work in foreign politics, Ambassadors, people who have been to Iraq and Afghanistan during the war they are people who come up to me and say “You know you guys really hit it on the nail.” So it really depends on which person that I met with.

JM: Is there anything you’d like to play in the future?

JM: Is there anything that has been the biggest challenge to play?

CN: I think that every character has its own challenges. I think that every story has its own strange sort of like power over the people who are trying to tell it and you can see it in the different ways it comes out. I never make these choices between my characters. I feel that Mar, that this character I play in the film, I feel that I really put a lot of my own personality in there. It meshed well with the person I am at home. I personally believe in sort of gospel of love. At some point I do believe that love will be recognized as the stronger force in this world rather than force. 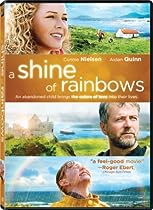 Purchase the DVD "A Shine of Rainbows" Today