How Donny Osmond Avoided the Pitfalls of Hollywood Life

The singer, actor, and former teen idol talks about what he's learned from his children and his Mormon faith. 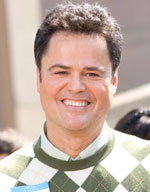 Osmond, a devout Mormon, is currently starring in the Disney movie, "College Road Trip," as a nerdy father who befriends a father-and-daughter team (played by Martin Lawrence and Raven-Symone) as they set off around the country to look at potential colleges. Beliefnet recently spoke with Osmond about how he dealt with his own children leaving the nest and how his Mormon faith helped him--and the rest of the Osmond clan--avoid the pitfalls of Hollywood life.

In your new movie, "College Road Trip," you play the father of a girl who befriends Raven-Symoné's character, a girl visiting colleges with her father. As a father of five boys yourself, how did you react when some of your older ones left the nest?

Oh, it's tough. It's hard. I was fortunate in the fact that my kids didn't pick universities across the country. They're a half-hour or 15 minutes from where I live.