10 Celebrities Who Overcame Their Addictions

10 inspiring stories of celebrities who have taken control! 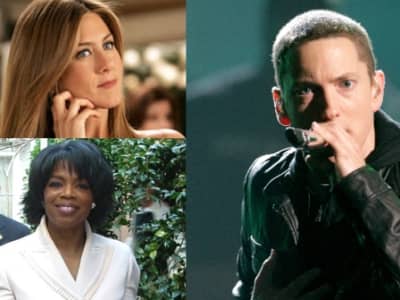 Celebrity addictions are a constant part of conversations and news stories. Whether it be Charlie Sheen or Amy Winehouse, if a celebrity is struggling with addiction you will certainly hear about it. There simply isn't enough talk about celebrities who have beaten their addictions. Here are 10 who have done just that!

Slash is one of the most recognizable figures in rock, and he was also one of the most prolific drug users. In 2001 the former Guns n' Roses guitarist was diagnosed with congestive heart failure as a result of drug use, and he decided to seek help. His addictions ran the gamut from heroin to alcohol, but with the help of his wife has been able to give it all up. Jennifer Aniston may be most known for playing a clean cut character in Rachel Green, but Aniston fought addictions to smoking and caffeine all through her run on Friends. Aniston was a full-on chain smoker, and it took an intense detox in 2007 for her to give it up. Now Jennifer uses exercise and yoga to stay nicotine free, replacing cigarettes and caffeine with much healthier ways to relax.

Eric Clapton once spent $16,000 a week on heroin, giving away three years of his life to the dangerous drug. At his lone performance during the addiction he passed out and had to be revived on stage. It took The Who guitarist Pete Townsend, another former addict, to convince him that there was a better way to live. Clapton has taken his experience and used it for good by establishing the Crossroads center for drug and alcohol treatment. Catherine Zeta Jones began smoking in her teen years and struggled to break the habit in adulthood. She received a wake-up call when the paparazzi snapped photos of her smoking while pregnant, sparking outcry amongst her fans and the media. Fearing that she would pass the habit onto her children, Jones then used them as a catalyst to quit. The host of Comedy Central's The Daily Show began smoking at the age of 15 in order to fill a void in his life. According to Stewart, it simply made him feel better. The encouragement to finally quit came from the CGL Foundation, which Stewart is a huge supporter of. Smoke free since 2000, it is rumored that the host keeps a gumball machine near his desk just in case a craving hits.

Brian Welch is one of the co-founders of platinum selling metal band Korn. At the height of their success he found himself embroiled in a world of money and drugs. He was addicted to alcohol, sleeping pills, and Xanax. But in 2005 Brian's life changed when he experienced a dramatic conversion to Christianity. He was baptized in the Jordan river and then sought solitude in order to cleanse himself of addiction. He credits God with his rehabilitation, and has been clean ever since his spiritual retreat in a hotel room. Since then he has been making Christian music and dedicating his life to helping others. Oprah is known for her how she inspires those around here. As a result it was a shock when she admitted on her own show that she used crack cocaine in the '80s. While there is a lot of speculation on how long the addiction lasted, it is clear that she has moved past it. Knowing that Oprah once overcame drug addiction just makes her inspirational attitude all the more impressive. Matt Damon never had a second thought about his addiction, until he saw a picture of himself smoking and realized how awful it made him look. Disgusted, Damon underwent hypnotic therapy to undo what had been a habit of 20 years. Completely satisfied with his treatment, the actor even convinced good friend Ben Afleck to try hypnosis – and it worked for him too! While Eminem has maintained his bad boy image and continued his taste for controversy, he has grown out of one part of his life – drug use. Eminem has become sober recently through the help of unlikely ally Elton John. The two formed a friendship after working together in 2001, and Elton stepped in to help Eminem kick the drug habit. While fans doubted that he would be the same, his success has proved that his talent came from more than drugs.

The lead singer of Aerosmith and current American Idol judge has struggled with drug use since high school. His addiction resulted in struggles in class, difficulty coping with success, and many damaged relationships. In 1986 his bandmates convinced him to go to rehab, but after 22 sober years he relapsed on prescription drugs. He has since completed rehab again and has told his story in an autobiography. Now he seems to be very happy as a judge on American Idol, and the new found clean image seems to suit the aging rocker.