Finding the 'Music Within' Ourselves

In his new role, actor Ron Livingston portrays Richard Pimentel, who is considered a hero among disabled Americans. 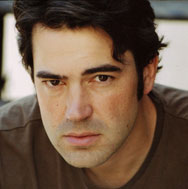