The versatile actor Sean Astin shares his insights on baseball, his struggles with fame, and his favorite words to invoke. 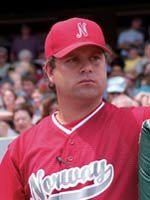 Whether you know him as Mikey, Rudy, or Samwise Gamgee, there's no doubt Sean Astin has captivated and charmed movie audiences with his portrayal of ordinary characters who find the courage and passion to defy expectations. His latest film, "The Final Season," is based on the true story of a high school baseball team's last season. The film is set during 1989-1990 in the small town of Norway, Iowa, where the school's team is renowned for its dignity, sportsmanship, and repeated wins. When the school board plans to consolidate Norway into the bigger school district of Madison, the town and the team are worried about losing their identity. Legendary Jim Van Scoyoc is forced to retire from coaching, and Coach Kent Stock (played by Astin) steps in to try to lead the team to a coveted 20th championship. In addition to being an actor, Astin is the father of three daughters, a director, and an advocate for animal rights, AIDS awareness, politics, and art programs for children.

A number of your movie roles, such as "The Goonies" and "Rudy," involve your character overcoming obstacles to accomplish a dream.What do you think is the biggest obstacle that you’ve had to overcome in your own personal life?

When "Lord Of The Rings" became incredibly successful, I think I became unhinged from reality for a period of time and I think fighting my way back to a reality that works for me and my family took a lot of effort. [M]y own ambitions and my own dreams and aspirations and identity and sense of what’s possible just kind of connected with fame.

Before "Lord of the Rings," I was always able to handle whatever fame came to me. But, because of the way that it increased with "Lord of the Rings," it just knocked me off-center. I just had a very hard time compartmentalizing the different things I wanted to do in life, and I just had to fight. My personality changed and it wasn’t for the better.

What sets "The Final Season" apart from "Rudy"?

If "Rudy" is about belief in yourself, "The Final Season" is about the expectation of excellence. [Y]ou can apply that to any phase or facet of your life--your work life, your home life, your spiritual life. If there’s an expectation of excellence, not just by you but by your team, by your coaches, by the people that are in your community, excellence is attainable. [I]t’s attainable in an enduring way, and that is a great legacy for people to have.

In the beginning of the movie Coach Van Scoyoc tells your character, "Norway is baseball." And then, later on in the movie there’s a news clip shown of the final game where someone in the audience also says, "Baseball is Norway, Norway is baseball." Why do you think baseball was such a strong cornerstone and a strong identity for Norway?

Most kids who play baseball have a very potent relationship to the field they played on. All they have to do is close their eyes no matter where they are in the world and they can picture it. [W]hen they drive by, it instantly brings back all the memories for them...it’s overwhelming emotionally for them because it is a tradition.

[T]here’s something even more--I don’t want to say sacred--but there’s something just unique and special about the field in Norway. It’s surround by cornfields on two sides. You can see the grain silo. It’s got houses that are very small, very modest little single-family residences. And if you hit a bad foul ball you can break Mrs. Jones’s window. And the field rumbles every time the train goes by. [I]f you leave your house anywhere in the town, or you leave the school, or you’re at the school, everything flows to the baseball park. Like a drain in a bathtub, everything ends up there. Because it’s a team sport, it just builds into...a community reality.

In the movie, there’s a scene where you’re first driving to Norway, and you pass a sign that says, "On the eighth day, God created baseball." Why do you think baseball is such a sacred and quintessential American sport? Do you think there is a tie between faith and baseball itself?

Faith is baseball. Baseball is faith. Norway’s baseball, baseball’s Norway. Norway’s faith, faith is Norway. It’s an American temple, and I suppose it’s secular to the extent that there isn’t a crucifix or some other kind of formal holy ritual associated with it.

[T]here’s something about being on grass and playing a game together that just connects you to the land. And if you’re connected to the land, you can’t help but be connected to the universe. [A]nybody who’s ever played baseball or stepped onto a field for spring training or gone to a professional baseball game and seen the guys run out on the field, there’s a kind of poetry of human motion. And there’s something divine about it. There’s no other word for it.

What is your favorite prayer?

There’s a guy named Rob Dugger who was a very senior member of the Democratic National Committee. [A]fter I’d met with John Kerry, [Rob had] arranged a meeting and this [was] at the height of my trying to grapple with what I was able to accomplish--and not--on a political level.

We just had this conversation, and I asked him that question. [H]e said every morning he wakes up and he says a prayer, "Allow me to be an instrument of Your will."  I thought that was excellent, and a few thousand times in my life since then, I've invoked the same request.