The former 'Full House' child star talks about being a Christian in Hollywood and actors who use faith for publicity. 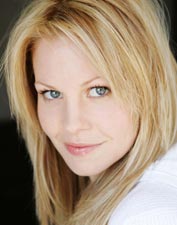 You probably know her best as D.J. from "Full House," the cool, eldest daughter of the Tanner clan. But since her days as a child star, she has become a married woman--her husband is former pro hockey star Valeri Bure--and mother of three. She is also a passionate Christian, influenced by her brother Kirk's enthusiasm for the faith.

Currently starring in the Christian DVD "The Wager," she plays an actress who tries to seduce the main character--a popular actor, played by Randy Travis--as he struggles with his faith. Cameron Bure recently spoke with Beliefnet about her Christian beliefs and how she prays for her former costars from "Full House." Watch segments from the interview or read the full interview below.

How are get-togethers with your friends or family members who are not Christian? Is there tension or hostility?