Whitney Houston's death saddened the music world, and shocked her family and friends. BeBe Winans remembers the incredible talent in this heartbreaking, yet hopeful, book excerpt. 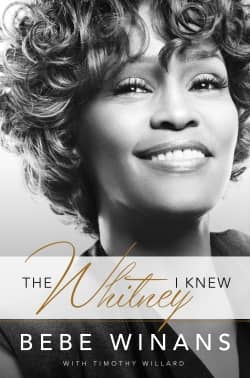 Pre-order The Whitney I Knew here.When my daughter, Miya, was four, she fell in love with the television movie Cinderella. The one in whichWhitney played the Fairy Godmother and Brandy playedCinderella. We taped it for Miya so she could watch it. And watch it she did. Over and over and over again.

One day Whitney stopped by the house. The doorbell rang and Miya ran to see who was there. When she opened the door, she stood frozen—dumbstruck. Whitney walked in, and Miya ran across the room and grabbed me.

“Daddy, Daddy! The Fairy Godmother is here!” Whitney clapped her hands, threw her head back, and laughed. “Oh, Lord! I spent all this time trying to be a singer, and now I’m a Fairy Godmother.”

I can just imagine Miya’s little mind working—how she would conjure up her little Cinderella world. I used to watch her play in her room. She’d act out both parts, first Whitney, then Brandy. How I’d laugh: my precious little daughter living in the princess world with Whitney. On that day, when the doorbell rang, my little Miya faced her hero. But in this case, her hero was more than just a character in a fairy tale played over and over on the television. Now her hero was a live human being who took a real interest in her life.

The same woman who played the Fairy Godmother also played the real-life role of Miya’s godmother. And maybe at that time in her young life, Miya didn’t fully understand the “godmother” idea, but she would over time. Over time she’d see past the glass slipper and the “Bibbidi-Bobbidi-Boo” and into the real person. And that time would come by way of laughter . . . play . . . and, later, sadness.

To my Miya and her brother, Benjamin, and to my nieces and nephews as well, Whitney was as real as anybody else. She’d call the house and even stop in from time to time. She held those kids. She played with them. She sang to them. She was around like any friend of the family would be.The public forgets that behind the glowing television screen a real person lives and breathes and eats breakfast just like everyone else. A person with friends and even enemies. A person with feelings. Celebrities get lonely—even if they’re superstars.

They desire to be found.

Whitney wasn’t just a singer who wore opulent outfits on stage; she was someone who liked to wear blue jeans and tennis shoes, she liked to play practical jokes, and she loved children. The fairy-tale character on the television found her way into my daughter’s heart, but it was even more than that. She found her way into Miya's real life. Whitney was like that good friend of the family who everyone refers to as Uncle or Aunt So-and-So. No one remembers when or how they became part of the family; they’ve just always been so. Always family.

Whitney was Whitney. And that’s why we all loved her. She brought herself into everything she did. She made the fairy-tale land her own. She brought that sparkle to Cinderella (and would later do so as Jordin Sparks’ mother in her final movie, Sparkle), and my daughter dove into it headfirst.

When I run into people in my community, they ask how the family is doing and they say how sorry they are for the loss of my friend. And nearly everyone says, “I loved Whitney.” There was universal upheaval when she died on February 11, 2012. I think people feel as if their Fairy Godmother—or maybe more so, Sleeping Beauty—has fallen asleep but isn’t waking up.

I remember Oprah’s interview with Whitney a few years ago. Whitney’s involvement with “the princess movie,” Cinderella, prompted Oprah to call her “our black princess.” I would agree. I think she was that for anyone who heard her sing. She was that for my daughter.

But eventually we all grow up and the fairy tales we love to act out in our pretend worlds lose their luster.

My daughter is sixteen now. She just attended her first prom. She dressed up in her pretty dress and walked out the door, her best version of Princess Whitney. But the fairy-tale world has changed now. It changed the day I received a phone call while at dinner with my son, Benjamin. My phone started going crazy. It was my cousin Cindy. “Have you heard what’s being reported?” she asked. “No.”

Cindy told me what she knew. I hit “End” on my iPhone with a trembling finger.I tried to call Pat, Whitney’s sister-in-law, but as I was dialing, my mom’s number showed up.

“Have you heard?” she asked.

“Oh, BeBe. CeCe and I just hung up with Pat. It’s all true.” Everything changed with just the flash of a phone screen.

It changed when Benjamin and I drove to my daughter’s work and told her that Whitney had died.

It changed when we cried together.

It changed when I realized my kids were more concerned about me than their own hurt.

Even now, I look at my phone, thinking she’ll call. But she doesn’t.

If you can, lean in and listen to that voice—the one that sang the National Anthem, the voice that drew us into The Bodyguard. Imag- ine that voice in the form of a phone call. Can you hear it?

“Hello-o, my bro-tha,” she would sing as I answered. Up and down the scale she’d soar—her typical phone greeting to me. We sang our hellos. “Hello, my bro-tha. Whatcha doin’ today? Mmmhmmm.” And of course, I would respond in kind. “Whatcha’ doin’, my si-ster! Can you get together sometime? Ohh-ohh, mmmhmmm.”

We’d perform our conversational opera, she and I. Can you hear it? Not just a voice, but a person behind the voice. The playful sister always wanting to sing, even on the phone.

That same playful girl and I were planning my fiftieth birthday party. Hers would follow the next year. We’d talk about what we’d do for the party and who I’d invite. And now, when I think about that birthday, I only hear an echo of our discussions. It’s a heavy echo. And I find myself singing back to it the same way I’d sing to her phone calls. But the echo fades and only my voice skims the empty hallway.

She’s gone. And I miss her.The Whitney I Knew by BeBe Winans, © 2012. Published by Worthy Publishing, a division of Worthy Media, Inc., Brentwood, TN. www.worthypublishing.com. Used by permission. Tell us what you thought of this excerpt on Twitter: #TheWhitneyIKnew @WorthyPub