Victor Cruz talks about his autobiography Out of the Blue - sharing the good, bad and triumphs in his life. 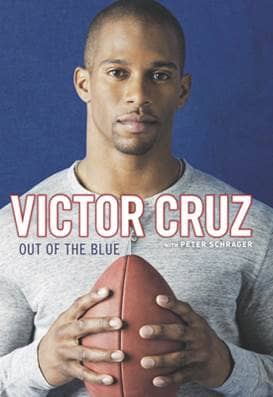 It’s about dreams, disappointments, setbacks, love, success, and hard work – all in all it’s a firsthand account of the talented NY Giants wide-receiver Victor Cruz. In his book Out of the Blue, Victor Cruz shares his candid life struggles and achievements.

“My mom was dying for me to write a book, she was my biggest advocate. I just wanted to get my story out there about my entire life from my point of view,” Cruz said.

Cruz was raised in Paterson, New Jersey by his hard-working single mother who made sure Cruz grew up with a good upbringing and the determination to overcome anything.

Cruz struggled with his studies in school. He took the SAT’s several times before scoring high enough to attend college. He never let the negativity get him down. “I went cold turkey from all of my vices. I stopped playing video games, I wasn’t going to the park to play basketball after school,” Cruz said. He knew that he wanted to be part of the University of Massachusetts football team and he was determined to not let anything stand in his way. “I remember my dad kept telling me nothing’s going to be given to you in life son and I used those words as motivation,” Cruz said.

Eventually Cruz overcame the SATS and faced several other adversities – his best friend died in a car accident, his grandfather was taken away by cancer, his father committed suicide and Cruz was left to pick up the pieces while attending school and trying to stand out in his football career.

Cruz attributes his mother, grandmother and his long time girlfriend Elaina for being by his side and helping him stay focused.

While working in a retail store so he could pay for school, Cruz met NY Giants legend Michael Strahan. That day Strahan shared some words of wisdom with Cruz that made him realize his dream, even though it seemed unattainable, was possible. “The NFL will find you if you’re good enough,” Strahan said. Those words reinforced his dream of becoming a NFL football player. “But if the NFL could find Michael Strahan at tiny Texas Southern, they could certainly find me at UMass,” Cruz said.

He goes on to tell his story on how he entered the draft and became a NY Giant. The team that he grew up down the street from would soon be where he would become a star. Cruz grew up as a Dallas Cowboys fan and while the blue may not be the Cowboys blue that he grew up loving –the blue he now sports is one of a successful dream and a Super Bowl.

Life is not easy, it’s full of road blocks that will throw you off of your original course and bring you down different avenues that will forever change your world. Victor Cruz is very familiar with the harsh realities of life and the struggles that everyone must overcome in order to achieve their goals and dreams.

“Know that I walked in those same streets, in those same places that you did. If I can make it out of there, then you can too.” Cruz said.

For more information about on Victor Cruz and his book. Visit Out of the Blue.