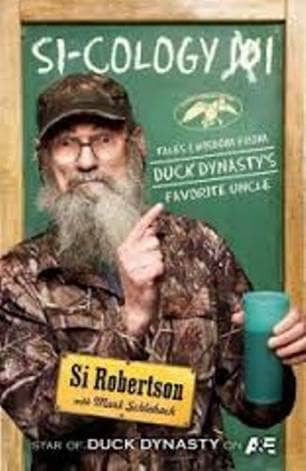 Silas Merrit Robertson is somewhat new to the fame and fortune of reality television. Better known as Uncle Si, Robertson is part of the dynamic Duck Dynasty crew. Robertson is letting his fans in on his life and telling more stories in his book Si-cology 101.

“The guys say that I’m even crazier in real life than I am on the show. What you see on the show is the real me, only a little tamed down,” said Robertson.

Behind the humor is a man that believes God is his constant. “My faith is all important to me. I was raised by God-fearing parents, and I grew to have my own faith,” said Robertson. The entire Duck Dynasty clan felt that it was very important to include prayer in every episode because God is a huge part of their lives and the reason why they’re successful. “We knew that America would appreciate the spiritual aspect of our lives, and that has proven to be true,” said Robertson. 11.8 million viewers tuned in to the season four premiere in August 2013, making Duck Dynasty the most watched non-fiction telecast in cable history – proving Robertson’s point that faith is important to everyone.

“Who else will you turn to if you do not have God,” said Robertson. “God has a sense of humor because he’s turned four disheveled-looking Christian guys into reality television stars.”

Robertson is known for his story-telling and that is exactly what his book Si-cology 101 is about. Si-cology 101 includes family photos and stories about his childhood, duck hunting, college, the Vietnam War and his family life. “People don’t really believe that I’m married because my wife Christine is not on the show. But I always tell them that I’m happily married and not looking for any change,” said Robertson. In his book, Robertson talks about his marriage and their two children Trasa and Scott.

The book can be classified as a happy accident. “At first I didn’t really think I had a book in me. But when it was explained to me that all I had to do was tell stories, I thought, hey, that’s easy! I can do that,” said Robertson. Si-cology 101 gives fans a deeper look into the life of Uncle Si and what it is like being in the United States Army during the Vietnam War and the everyday life of a Duck Commander. Fans will be able to read, firsthand, the life of Uncle Si and feel more connected to the Duck Dynasty family.