Pagano’s book, Sidelined, is more than just a touching story – it’s a testament to the triumph of will and determination. 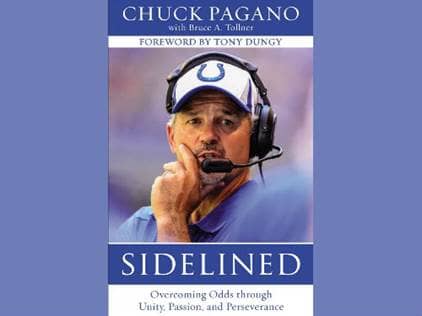 “You just landed your dream job and then you get life changing news - it’s a whack to the head,” said Indianapolis head coach Chuck Pagano as he talked about being diagnosed with cancer.

In his book Sidelined – Overcoming Odds through Unity, Passion and Perseverance, Pagano discusses his triumph over cancer and the obstacles that he’s overcame in order to become a head coach in the NFL.

Instead of thinking about the worst, Pagano removed any dismal possibilities from his future and focused on beating cancer. “As long as you have the right mindset and as long as you have faith, live in the vision and not in circumstance and believe - you can overcome anything,” said Pagano. “We all have to deal with circumstance whether it be cancer or the loss of a loved one. There’s a lot of bad stuff going on. You have to be determined.”

And that is the same coaching style that Pagano enforces on the field – a determination of will to bring on greatness. The quote, “We can, we will, we must, by any means necessary – we have no choice – we will win” comes from an old coach that crossed paths with Pagano. That saying is now on the back of t-shirts in the Colts’ house. Pagano instills the drive for determination in his players and believes that you must stay positive and determined in order to have positive results. It’s the same drive that helped fight off leukemia.

Pagano has played a vital role in not only becoming an inspiration for the Colt’s community, but also in becoming the leader for a group of men who strive for excellence. “The organization was great. They embraced me and my family. The support of the community was overwhelming and humbling,” said Pagano. “Along with great doctors and caregivers - this is the place to get sick. My best medicine was watching the team and this great group of men become galvanized and come together as family.”

Pagano’s book, Sidelined, is more than just a touching story – it’s a testament to the triumph of will and determination. It’s proof that good things come to those who are willing to put forth the due diligence. Pagano’s triumph is not just a victory, it’s the result of a community coming together and standing on the sidelines next to a world class act.