Whether or not you believe that he's a changed man, Vick shares the good and bad of his life. 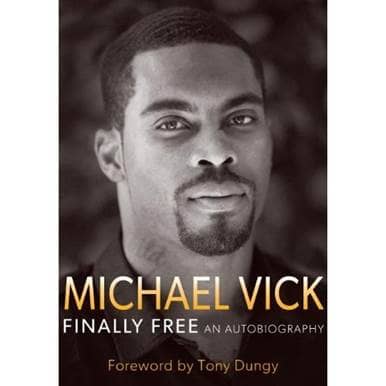 Second chances, if they appear, can make a world of a difference. These chances can change a person’s outlook on life and the image that others perceive them in. Michael Vick is not a stranger to struggles and controversy, or the lime light that comes with the negative and positive fame.

In his book Finally Free, Vick discusses his entire life candidly. From the bad streets of Newport News, Virginia to the day he received the phone call that ripped his entire life up from under him.

In his book Vick describes his life as:

“I went from the ground – a foundation of faith and family that positioned me for success…to the air – a dangerous and selfish rise that took me higher and higher in flight…to a crash – a wounding yet deserved fall that took me lower and lower …to the cage – a humbling and desolate state that helped me return to the ground, rediscover my foundation, long for redemption, and ignite a strong desire to change. To change and rise again…”

Throughout the book, Vick talks about his toxic attitude and how through fame he managed to lose sight of who he really was as a person. Vick offers his honesty and breaks down his own arrogant tendencies. In most cases his selfish arrogance and cocky attitude were the reason why he got caught and continued towards a downward spiral. The drug paraphernalia charge at the airport, his lies to the Atlanta Falcons organization and lies to the NFL commissioner Roger Goodell were all stemmed from Vick’s ego and detrimental attitude.

There is no point in the book where Vick excuses his animal cruelty conviction or tries to gain validity for his actions; he knows that he did wrong and openly says throughout the book that he has made a lot of mistakes but those mistakes made him into a better man.

While incarcerated, Vick had several meetings with his mentor Tony Dungy. Outside of the bars, in the press and with other officials, Dungy received a lot of criticism for reaching out and helping Vick make a comeback. However, Dungy saw Vick for who he really was. He saw the man that wanted to make sure that his children grew up with their dad around and who wanted young people that had cheered for him, to know that he wasn’t a bad person.

Whether you believe he’s a changed man or not, Vick has walked the walk to redemption. He is involved with several charities and organizations for great causes. And more importantly he’s found his connection with God again. Who are we, the public, to judge whether or not he’s finally free? He did the time for the crime(s) he committed. Only God can judge whether or not he’s finally free.“Hokies. Falcons. Eagles, I’ve always been a bird.” Vick said in his book. “My story is not finished. I have more to do. I have something that I want to give back to everyone that supported me.”