Why People of Faith Can Embrace the 'Noah' Movie

John Snowden, the Biblical Consultant to filmmakers on the 'Noah' movie, responds to recent criticism surrounding the film.

There has been no shortage of headlines in recent weeks about Paramount Pictures' upcoming feature film Noah – with a fair amount of the coverage speculating about how closely or loosely the movie adheres to the story of the title character as found in the Bible.

Unfortunately, those who have felt compelled to criticize the film in these stories haven't actually seen it – so it's difficult to understand what exactly they're criticizing. I have seen Noah – in fact, I've been working on it for the last two years as the filmmakers' biblical adviser. 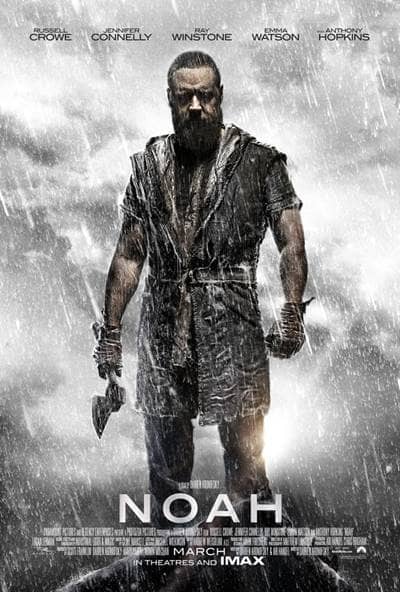 I will confess, when the studio first approached me about consulting on the project I had mixed emotions, weighing my caution of Hollywood's ability to take liberties with stories and values against my standard for good theology and a healthy presentation of Bible stories, theology and mission. Paramount was adamant about having a practical, integrated adviser in the process from start to finish, which impressed (and surprised) me.

I read an early draft of the script and was particularly impressed with their exploration of judgment and mercy. I accepted the offer and quickly found myself fully engaged with the creative team, talking about Noah, God and Jesus a lot. And they listened. And asked more questions. I've read probably more than 10 drafts of the script, given longwinded feedback on each, seen every piece of footage that was shot and been flown around the world ... twice.

With all of that work under my belt, and the March 28 premiere just a little more than a month away, I am happy to offer the following 10 reasons I believe we as a church can find very valuable reflections on Noah, God and theology in the film. This isn't to suggest the movie matches everyone's read of Noah perfectly, but it is a very worthwhile time to spend understanding how a couple of very thoughtful filmmakers interact with Noah.

1. Noah Has a Relationship with God

In the film Noah, Noah hears from God at times, wants to hear more from God at other times, is directed by God, and acts singularly different than his contemporaries in following God's directives. Scripture is overtly quoted by many characters in Noah. God's words from the Bible are unmistakably a part of this film. The film is pro-God.

The Biblical text lists out what God said to Noah but never tells whether that was verbal or written communication, though most would assume it verbal. In our film, God gives visions to Noah just like God gave to several prophets and many key Biblical figures (Joseph, Daniel, Isaiah, Ezekiel and John to name a few). I pray one day my sons will dream dreams and receive visions directly from God, just like God promised us through His prophet Joel.

We have all sinned and fallen short of the glory of God. That includes Noah. It's healthy that Noah struggles to understand precisely what God is saying, but, regardless, Noah trusts and acts faithfully. The struggle is not always easy to watch, particularly in the later parts of the film, but the values that come out of this narrative are special.

A woman in her early 20s whom I spoke with about the film (she grew up "churched" but is since disengaged) really appreciated that the film's Noah heard from God but not in a simplistic way. It felt to her ironically accessible; since she's never personally "heard" God's voice, she felt a connection to Noah as he began to trust God's vision.

3. Noah Sees and Acknowledges His Own Sin

Noah sees his own sin as no better or worse than those who will die in the flood. This evokes the great scriptural dilemma: God's plan to fill the Earth with humanity reflecting His glory has been promised, but our sin has stained the reflection of His glory in all of us. Four-thousand-ish years after Noah, Jesus did the work of restoration for us. Noah the movie agrees that we hadn't earned our salvation back then either. Our long-white- beard, long-white-robe depiction of a docetic (proto-Evangelical?) Noah has not helped our kids learn that we're all coming up short were it not for God's grace. That ark Noah built is a gift, not our own proud creation, so that His purposes can be fulfilled through us.

4. It Keeps Closer to More of the Text Than You Might Have Imagined

The film sticks to many key details from the Text. The ark set was built twice to full-cubit scale, though not out of gopherwood. It depicts a global flood. No extra people survive the flood who shouldn't. God speaks to Noah. Noah gets drunk. Tubal-Cain forges iron and bronze. Ham and Noah have a rough father-son relationship. Creation from nothing. Sin. Murder. Methusaleh. There's a dove and a rainbow, two of each animal (admittedly seven of each clean animal was a detail that didn't get communicated in the film), an olive branch and lots of water coming up from the ground.

5. Noah Speaks, and the Women Have Names

In the Bible, Noah does not utter a single word before the flood waters recede. That Noah speaks in this movie, as well as that his wife and daughter-in-law also speak and have names, are extra-Biblical points. But for any storyteller, opening mouths, as well as putting faces and names together, makes sense. Not only that, but their characters are used to help explore important Biblical theology. In our world today, females want to empathize with Biblical stories, so this opens up a huge opportunity for Emma Watson (as Noah's daughter-in-law) to dive knee-deep into an incredible performance around Biblical themes of barrenness, miraculous healing and a healthy feminine spirit that engages both men and women. 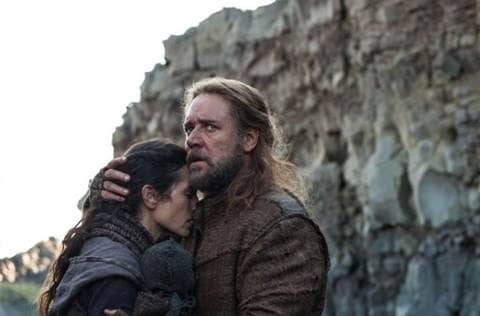 6. Noah Focuses on His Family

Amid impending disaster Noah fights to keep his family focused on the goal: to build an ark in preparation for God to accomplish His purposes. Sure, Noah's family is a bit younger than the Biblical text (our casting call for 100- to 300-year-olds didn't cast a wide enough net), but it proved key in this film to create a well-resonating set of characters. He is a father trying to keep his adolescent family focused on God's mission to act justly, love mercy and walk humbly with God. Young adults will freely connect to Logan Lerman, Douglas Booth and Emma Watson's characters' toil as much as I did with their onscreen dad's toil.

In a postmodern world that says never to trust someone over 30, this story has Noah seeking out his loving, wise (and scriptural) grandfather Methuselah to help interpret the vision he is getting from God and how to act upon it. Methuselah also gives the key scriptural explanation for why God is bringing the flood. Listen for it.

7. The Story Depicts (and Personifies) Evil Humanity in Genesis 6

Some have laughed off Hollywood's inclusion of a villain by commenting that Noah in the Bible didn't face an archrival other than "rain." Probably true in one sense. But Genesis is explicit in saying that every man's heart was focused on evil all the time and filled with violence. Storytellers put names to concepts. Writers Darren Aronofsky (who also directed) and Ari Handel have done a similarly important thing by creating Ray Winstone's character as the personification of mankind's evil: he is spectacularly vile in leading the people against Noah and the ark.

Many of the rumors swirling about the film are flat out false (hint: no overpopulation, no global warming). More importantly, missing from the rumors are some really positive values in the film. Throughout, the film explores Noah's understanding of God's justice and mercy, held in appropriate tension with one another. It really wrestles with the question "Does Humanity Deserve to be Saved?" It may not use those words, but the important question Noah wrestles with deep in his soul is whether God wouldn't be better off just cutting bait – letting Noah and his family die off, too -- and saving the animals. Of course, Noah isn't God, and God knows exactly what He's doing – both in the text and in the film.

Supernatural Physical Healing Is Important in the Story

An active God with a plan will often move in power to make miracles happen. Our God makes known the end from the beginning; His purposes will stand and He will do all that He pleases, including healing the physically broken to bring about His plan.

The Imago Dei Is Front-and-Center

The most foundational, core piece of theology that personally moves me forward when I'm struggling is that we are created for a purpose in the image of God. Noah carries it with him and speaks it. Tubal-Cain speaks a variant on it, too.

An overly gushy Hollywood Noah might be tempted to let a flock of "nice" or "good" humans on the boat, or three or four extra cute giraffes that he felt bad for. But this Noah stands strong. His mission is clear: Nobody but his family survives.

9. Bible Stories are Back – in a Big Way

10. Twenty-Somethings Are Disengaged From Faith, and This Can Engage

America has an emerging (and emerged) generation that many polling organizations have found to be increasingly disengaged from faith (as in, disinterested). They're not arguing about the apologetics we once held dear; they're just … generally detached. This film is created by secular and Jewish storytellers for a wide audience. It will engage a young, secular audience who will be thinking about the great flood with or without us. If you're concerned a nonbeliever is going to learn the details of the story wrong, I'd encourage you to reread the list above and start to have beautiful conversations about faith over some popcorn and soda in nonthreatening ways with people you may have never otherwise had the chance. The Gospel alone is good news enough with or without a movie, but when theological questions begin to emerge from inside any person, I would far rather have you and I listening instead of criticizing. Remember, it is the church's responsibility to spread the Gospel – not Hollywood's. That Noah tees up a deeper conversation about God and his plan of salvation for us is a considerable blessing. We can have fun, spirited debates of how you'd do it differently if you had $125 million to make your version of Noah's ark, but let's focus on the opportunity for now and use it as a springboard for holy conversations.

John Snowden has served as the Biblical Consultant on Noah since April 2012. After six years of vocational youth ministry in West Los Angeles, John moved with his family to Kathmandu, Nepal, where he is a Vice President of CloudFactory, a tech company seeking to connect a million people in the developing world to basic computer work while raising them up as leaders to address poverty in their own communities. He is not related to Edward.