Why Do We Watch Football on Thanksgiving?

College and high school football teams began playing rivals in the late 1890s during Thanksgiving – and some of these traditional matchups still continue to this day. 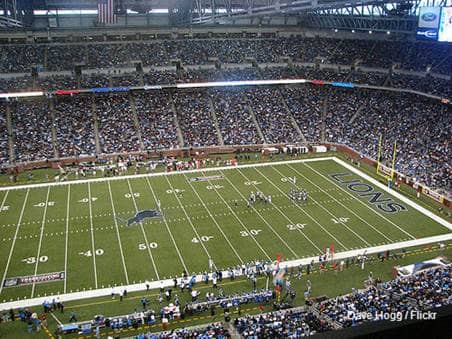 Watching football on Thanksgiving has been a tradition since the 19th century. In 1863, President Abraham Lincoln declared Thanksgiving as a national holiday and a few years later the first holiday football games were played. College and high school teams began playing rivals in the late 1890s during Thanksgiving – and some of these traditional matchups still continue to this day.

On November 17, 1869, the Evening Telegraph newspaper of Philadelphia published the announcement: "Foot Ball: A foot-ball match between twenty-two players of the Young America Cricket Club and the Germantown Cricket Club will take place on Thanksgiving Day at 12 1/2 o'clock, on the grounds of the Germantown Club." The locality of Philadelphia to both Rutgers and Princeton brought on speculation that this game may have been played under similar rules and perhaps involved some of the same participants, or at least people familiar with the game played at Rutgers, and a second match at Princeton, earlier that month. Princeton played Yale in the New York City area on Thanksgiving Day from 1876 through 1881. Then in 1882, The Thanksgiving Day football game became an institutionalized schedule of organized football.

The National Football League was founded in 1920 and they immediately adopted the Thanksgiving game day tradition.

During some seasons, the NFL would host as many as six Thanksgiving games on one day. However, today the NFL holds three Thanksgiving games each November. The Detroit Lions and the Dallas Cowboys are always featured on Thanksgiving game day. In 1934, then owner George A. Richards set up a holiday game as a way to draw attention to his franchise which was often overshadowed by the Detroit Tigers. Richards was also a radio station owner and he used his connections to ensure that the first game was broadcasted on 94 stations throughout the nation. Despite the Lions loss that year against the Chicago Bears the tradition stuck. Then in 1966, Dallas Cowboys general manager Tex Schramm followed the lead and secured an annual holiday game for his Cowboys. Schramm’s move also proved to be a success and the tradition of the Cowboys playing on Thanksgiving stuck as well.

Thanksgiving is the perfect marking point for fans because it is the beginning of the end of the season when each game represents the realistic vision of the playoffs.

Families all across the United States partake in football games that they deem as the Turkey Bowl. These games are usually unofficiated with a flag football, street football, or touch football format. The games are played by a variety of people ranging from extended families, college fraternities, volunteer fire departments, and local churches across the country which use the day and the game to have fun, exercise and socialize amongst each other.