“There are a lot of Christian films that are made for just Christians but this is not the film – it’s a film for everyone,” said Macdonald. 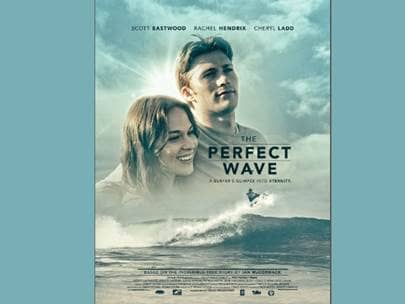 The Perfect Wave is based on the true story of Ian McCormack, who grew up surfing the waters of New Zealand. The film was shot on location in South Africa, Australia, Bali, Mauritius and New Zealand.

The Perfect Wave is story that reveals the redemptive power of Jesus Christ. Director Bruce Macdonald said, “I was not really into watching Christian films. But being a persistent wife and she made sure that I watched the film and I was deeply moved by the message of 40 steps to a better marriage. I woke up in the middle of the night and I felt like God had spoken to me.”

In The Perfect Wave, Ian, sets out on a journey with his best friend to surf some of the most famous and challenging destinations - in search of the mythical "perfect wave."

During his travels, Ian falls in love with a beautiful, free-spirited girl, Annabelle. Soon Ian’s adventure is sent into a different direction, when his life is changed by an encounter with a school of box jellyfish during a fateful evening swim. The venom is so deadly that a single sting can kill a man, Ian is stung multiple times, and pronounced dead shortly after he arrives at the hospital.

Denounced to everyone, Ian miraculously awakens with a transformed understanding of life and a chance to begin anew.

The Perfect Wave has been described by director Bruce Macdonald as a love story with four pillars - a mother's love, a young man's love for surfing, first love and, most importantly, God's love. "This film shares the amazing story of God's plan for Ian's life and reminds viewers that no matter how far you run, you can never outrun God's love," said Macdonald.

This remarkable film is a testament of faith. Macdonald believes that the film reflects the faithful ideal that no matter what you’ve done and no matter what place you are at – Jesus will set you free.

The film was originally released in 2009 and was made to genuinely change lives. “There are a lot of Christian films that are made for just Christians but this is not the film – it’s a film for everyone,” said Macdonald. “Making the film was the greatest experience of my life.”