Sassy, vivacious and funny gal Better Midler is not slowing down at 70. That’s not the comedian, actress, or singer’s style. 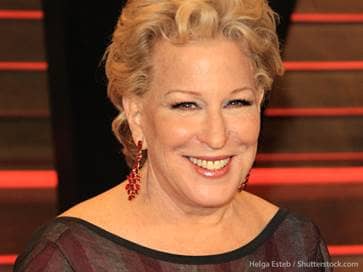 Sassy, vivacious and funny gal Better Midler is not slowing down at 70. That’s not the comedian, actress, or singer’s style. It’s no wonder she’s ready for her next role in Hello Dolly opening in 2017, and will be the highest paid actress on Broadway.

Midler was away from the stage for decades until she was persuaded to return to the theater in 2013 as agent Sue Mengers in the one-person play, I’ll Eat You Last.”

She Tweeted about her new project that starts to rehearsal in April 2017:

“I am looking forward to portraying one of the most beloved characters in all of American musical comedy, Dolly Levi, born Gallagher, in Hello, Dolly!. I know I’m going to have the time of my life, and I am so glad to be under the wings of Scott Rudin as producer and Jerry Zaks as director. See you next year!”

The multi-award winner and Hawaii born Midler is also the face of Marc Jacobs for the 2016 spring and summer collection. Jacob’s announced on Instagram that the ideas for many of his designs are influenced by the Mighty "M."

He posted “I was curious and excited by her energy, power and the exuberance in her voice and bold, brassy glamour.”

Bold and brassy is Bette, who is doesn’t see herself as a woman who could do it all.

“My idea of superwoman is someone who scrubs her own floors,” she said.

Midler arrived in New York City for a role in the film ironically called “Hawaii” in 1965, and took the Broadway stage in Fiddler on the Roof a year later. She would release her debut album in 1972 and two years later she picked up a Grammy Award and received a Tony Award for "adding lustre to the Broadway season."

“I hope to keep entertaining in some way until I can't physically entertain any longer. It's what I was born to do, and I love this profession,” Midler shared.