Reality star Big Ang passed away, but she made a lasting impression on her fans with her funny quips, and mannerisms. 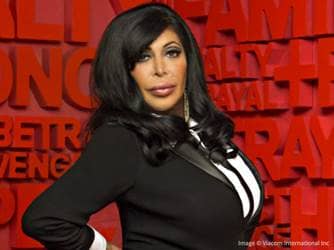 Full of life and the face of the reality show “Mob Wives” Big Ang (Angela Raiola) who sadly left her fans and family behind for the big disco in the sky.

Raiola passed away from throat cancer at 55 that also spread to her lungs and brain. After being in remission, she told Dr. Oz in an interview that “It's shocking what happened. First I thought I was cancer-free and I was gonna have a big celebration, have a party, and then a month later I had stage IV.”

Raiola had a magnetic personality, loved cooking, and started the charity “Big Ang Angels” to help others recover from Hurricane Katrina. The organization continues to help families on Staten Island by providing shelter, clothes and food. Big Ang loved her fans.

Her family shared on social media, thanking people for their support and out pouring of love.

“Thank you for your love, prayers, and unconditional support of Angela right to the very end. She truly went out richer than any monetary value could ever amount to. The family asks for privacy and peace during this most difficult time. In typical Big Ang fashion, we know she would say 'Love you my babies!' This page will remain open as a celebration of who she was and will always be. It has been my esteemed privilege and honor to represent her in the highest regard via social media.”

“Mob Wives,” a show based on women married to the mob or related to a member. It premiered in 2011 and elevated Raiola to stardom. She told Beliefnet on 2012 she was shocked regarding the success of the show.

“I can’t even believe what happened here. I mean it [show] just totally, totally, blew up. You know, I’m loving it. It’s the best. I have been a single parent my whole life, so life was pretty rough. I’ve been working in bars since I was 15. It was hard. But now things are so much better.”

She followed with a book (Bigger Is Better) on her life, and the lessons she learned from house arrest, men, and family.

“I wanted to tell people about the real me,” Raiola said who was not hesitant in writing the book. “Not at all, I was happy to write it. I wanted input from all my family and friends. Everybody spoke in the book and it went well—I was very happy.”

The niece of mobster Salvatore Lombardin loved being a mother, grandmother, and left the show to spend more time with family. She posted on Instagram.

“Guess who became a grandma again! This little bundle of joy is what makes it all worthwhile,” she wrote.

“This is just what I needed this week. I'd like you to say hi my baby to Anjolie Scotto! She was born last night and is a healthy 6lbs, 7oz with gorgeous black hair! I love her so much. Yes, I'm going to spoil her as well haha.”

Friends and family celebrated Big Ang’s life with music, food, dedications, and toasts, just the way she requested. She loved a party and desired that people would not mourn for her, but share a life that was lived to the fullest.