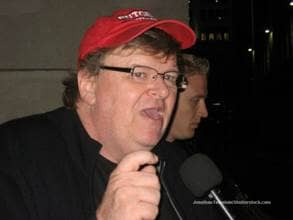 The movie broke records in ticket sales, earning over $100 million last weekend, causing a flurry of activity on social media handles, seemingly dividing Hollywood. “My uncle killed by sniper in WW2. We were taught snipers were cowards,” wrote Moore Jan. 18 in a series of Tweets. He continued “Will shoot u in the back. Snipers aren't heroes. And invaders r worse.” Moore opposes the Iraqi War and is an advocate for stricter gun laws.

The film is based on Navy Seal record-holding sniper Chris Kyle’s 2012 memoir. Kyle was killed at a shooting range near Chalk Mountain, Texas a year later. He is no stranger to controversy with the documentary of “Sicko,” and “Fahrenheit 9/11.”

“Hey Michael, when snipers like Chris Kyle are saving American lives, that would be a good thing. Even an idiot like U can get that.”

Harsh words for Moore who responded to the crossfire by writing he never Tweeted about the movie or slamming Chris Kyle.

“Hmm. I never tweeted 1word bout AmericanSniper/ChrisKyle. I said my uncle killed by sniper in WWII; only cowards would do that 2 him, others…”

Moore is not alone. Actor Seth Rogan wrote about his distain, adding “American Sniper kind of reminds me of the movie that's showing in the third act of Inglorious ‘Basterds.’”

Moore was also upset that “Iraqis are referred to as “savages” throughout the film.