Michelle Williams Gets Personal, Triumphs on 'Journey to Freedom'

With her newest album, ‘Journey to Freedom’ singer Michelle Williams is using her calling in music to inspire others and share her personal story. 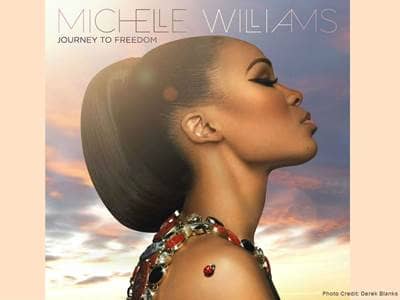 Everyone knows her as a member of one of the hottest and most successful R&B groups, Destiny’s Child. But singer and Broadway actress Michelle Williams is much more.

A versatile artist, Michelle has a hand in many ventures: co-owner of WNBA team Chicago Sky, participates in several philanthropic organizations (American Heart Association, Hope on Wheels), and is the star of an upcoming reality show on Oxygen called "Fix My Choir," which also features fellow gospel artist Deitrick Haddon(Preachers of LA).

She continues to make remarkable moves in her music career that has spanned 15 years and her achievements continue to grow, but she has also taken the brunt of negative criticism during her time in Destiny’s Child and even as a solo artist.

Websites like www.poormichelle.com, have been dedicated to belittling her accomplishments, labeling her as a “third wheel.”

At times, those voices of rejection undercut her confidence as she struggled to overcome self-doubt.

Her fourth and latest studio album, Journey to Freedom, addresses all of the things she has endured: reaching a state of self-acceptance, ridding herself of bad relationships (business and personal) that kept her from being her best self, as well as silencing the naysayers. She considers the album her most personal to date.

“[This album] It’s a little more aggressive. It’s definitely me being more transparent…When you go through life, you go through more and more things and I don’t mind sharing a lot of those situations.”

Songs like “Free” and “Believe in Me” allow fans to peer into her life during those moments of angst and questioning.

“Maybe I’m guilty of losing my focus, was too busy chasing what they wanted me to be,” she sings in “Believe in Me.”

She says it’s her favorite track and explains how it encapsulates a personal journey of faith and growth. Now she can say that she believes in herself again.

“It’s probably my autobiography of where I am right now, at this point.”

Don’t expect a full gospel album on Journey to Freedom, although many will liken it to that based on the messages of faith interspersed throughout.

Listening to the album, you get a range of genres that Michelle, herself, has done in the past; from rock and hip-hop, to pop and Afro-beat. She features rapper Lecrae (Fall), who also just happens to be Christian, and receives the same criticisms of blending “secular” sounds with traditional gospel or Christian music. Michelle thinks that the gospel genre shouldn’t be pigeonholed or stuck in one aspect of music.

“I think gospel music is evolving. I think artists are starting to realize that there is no particular sound. It is what you want to be. Gospel to me is the message.”

Inspirational and uplifting, the album is meant to communicate hope and triumph in the midst of struggle.

Journey to Freedom was released September 9, 2014. It can be purchased on iTunes.