‘Little Boy' is a Timeless Classic

Native New Yorker actor Michael Rapaport believes the movie business is in a crisis, but by supporting films that anyone can appreciate, like “Little Boy,” it doesn’t need to continue. 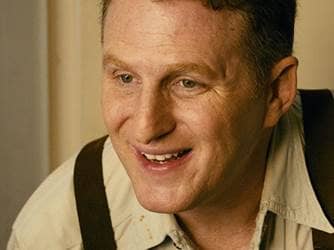 Native New Yorker actor Michael Rapaport believes the movie business is in a crisis, but by supporting films that anyone can appreciate, like “Little Boy,” it doesn’t need to continue.

“I consider a crisis where we’re at in the movie business,” said Rapaport, who believes supporting quality films will send a strong message to the industry to produce more movies everybody can enjoy together. “I think it’s a film that will stand the test of time, and it’s a timeless story, in a timeless setting.” Rapaport plays James, the father of seven-year-old Pepper Flynt Busbee (Jakob Salvati).

When James is called to join the Allied forces during WWII, Pepper is crushed. But after hearing a sermon on faith, Pepper enlists Father Oliver (Tom Wilkerson) for help. The priest then gives Pepper a list to be kind, and befriend Hashimoto, a Japanese man who was facing racism. Pepper believes his faith will move mountains, and hopefully bring his dad home, but he does so much more.

Rapaport played many film roles before, but “Little Boy” was something special, and challenging, besides developing a Southern accent. It was good opportunity, a well-written script with people who were very focused in making something that was unique. “I think they did it, and I’m really proud to be a part of it,” said the actor from the FX series “Justified.”

Rapaport said that the film was a positive depiction during the war and touched on the subject of racism against the Japanese during that time period. When researching the history of the time period for the film, he discovered racism after the Pearl Harbor was shocking.

“The extent of the racism was vile,” he said. “It was really interesting to learn about that, and to learn that was accepted by the masses.”

The script had all the right ingredients. It takes on racism, war, faith, family, and finding hope. Working with Jakob was a memorable experience. “I can’t say enough about how good he was. How professional he was, and how hard he tried, despite being a young kid,” Rapaport explained. “His effort was there all the time…it was very genuine, and very sweet, and an honest experience. I think he delivered something that is very unique.” Salvati, 11, who also teaches Sunday school, said he learned something as well.

“I learned that all things are possible with God. He’s amazing and does everything for you. He’s given you your life, and He’s given His life for you.”

The tide has turned over the last four years in the film industry as more quality films are catching the attention like “God’s Not Dead,” “Heaven is for Real,” and “Little Boy.”