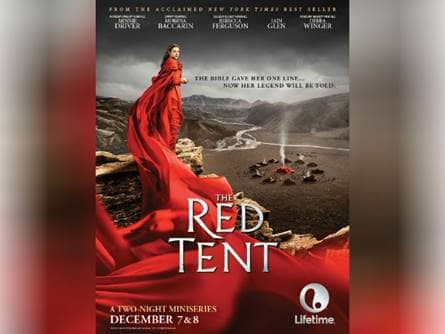 From the highly acclaimed and best-selling novel, The Red Tent will premiere a two-night miniseries event December 7 and 8 at 9 p.m. The Red Tent is a tale that takes place during the times of the Old Testament, told through the eyes of Dinah, the daughter of Leah and Jacob.

“I’ve been asked if I think the miniseries is faithful to my book, which makes me smile since I still get criticism about my novel not being faithful to the bible. When Lifetime purchased the rights, I knew the film adaptation would be very different from the book because in a visual medium, you have to show rather than tell,” said The Red Tent author Anita Diamant. “There are many differences between book and movie, but the series is faithful to The Red Tent in what I consider the most important ways because it puts women’s work, courage, and ingenuity in the forefront. It also shows how women’s relationships with one are important, positive and sustaining - something the media rarely does. I’m very pleased by that.”

Actress Morena Baccarin who plays Rachel, one of Dinah’s mothers, said that the film is a story with universal themes. Not just for women but for everyone - love, betrayal, life, death, and family.

The miniseries begins with Dinah’s (Ferguson) happy childhood spent inside the red tent where the women of her tribe gather and share the traditions and turmoil of ancient womanhood. The film recounts the story of Dinah’s mothers Leah (Driver), Rachel (Baccarin), Zilpah and Bilhah, the four wives of Jacob (Glen). Dinah matures and experiences an intense love that subsequently leads to a devastating loss, and the fate of her family is forever changed. Winger portrays Rebecca, Jacob’s mother while Tudor stars as Joseph, Dinah’s brother.

While staying true to the story, the reality of the trials and tribulations that these women of The Red Tent are finally surfaced along with their raw emotions and fortitude for life.