Writing a screenplay about an underdog character in the film “Little Boy” came easy for director Alejandro Monteverde since he is one himself. 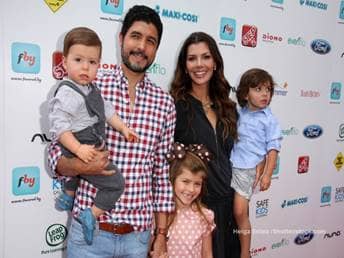 Writing a screenplay about an underdog character in the film “Little Boy” came easy for director Alejandro Monteverde since he is one himself.

Monteverde, who directed the independent hit, “Bella” was born in Tampico, Mexico, a port six miles from the Gulf Coast.  He attended film school after getting through a two-year waiting list at the University of Texas at Austin. With learning a new language, and being one of only a few Latinos attending, he pushed through using self-encouragement. “I would come up with my own quotes[s] that I would tell myself which is ‘Limitation is creation.’ Thanks to being limited, I had to think outside the box to accomplish anything,” said Monteverde.

Thinking outside the box and encouraging himself during life’s obstacles paid off.

Monteverde’s first film “Bella,” was in 2006 winning the People's Choice Award at the Toronto Film Festival, shattering box-office earnings for Latino-themed films. After three years of writing, filming, and raising money since studios found it unmarketable—“Little Boy” will arrive on April 24th.

“Little Boy” is set during the backdrop of World War II during the 1940s, and examines the unbreakable bond between a father and son. His father (Michael Rapaport) is called to join Allied forces, leaving his best friend behind.

Against all odds and circumstances, 7-year-old Pepper Flynt Busbee (Jakob Salvati) will do whatever he can to bring his father back from war. Pepper is short, awkward, and was bullied, but believed in the impossible in what Monteverde deemed as the ultimate underdog story.

“I wanted to do an underdog story, and the first thing that came to my mind was a child. If you think about it, children are the ultimate underdogs, because they are dependent on everybody. I came up with the character little boy and his father who is his only friend,” said the father of three.

When you’re a kid you believe in magic and fantasy. Pepper believed that he could move a bottle after attending a magic show, but realized it was a trick.

The title of “Little Boy” shares a global innocence o f a child, a blank slate, even during the midst of war. “War is a very complex subject. In my opinion there no winner, and in every war innocent people die, but sometimes it’s needed to end a greater evil.” said Monteverde.

Pepper lives this as he waits for his father’s return, and believes that he can physically move mountains through his faith. There are lessons he needs to learn along the way like loving people who look different from him, and serving others in his community.

For Monteverde, it’s been a long road to the finish line as it’s been hard to get the movie even out to the public.

“We are David and Goliath. We are shorter, like David--the other movies are Goliath. They’re coming out with films like “The Avengers,” with a 100-million dollar [budget] and with 50-million dollars [in] marketing money behind it. We are here trying to compete on this very strong market and in my opinion, I feel there’s a major disconnect between Hollywood and the audiences.”

Monteverde is used to a challenge, but said he needs the public to demand better movies from Hollywood so films like “Little Boy” can be funded.