Hoda Kotb Guides Us to Where We Belong

"Where We Belong" is relatable. Everyone contemplates their overall existence and Hoda Kotb captures the essence of the answers. 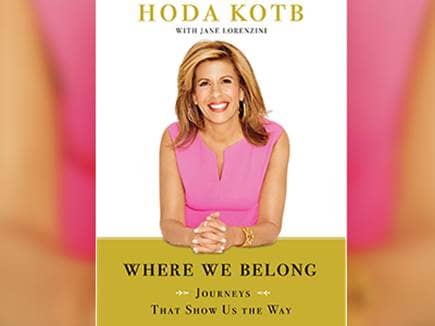 “For all of us, you’re never 100% sure if you’re where you’re supposed to be in life. You get only one ride around the sign. But by life and circumstance, we end up where we are. You wonder if you’re where you belong whether it’s emotionally, spiritually, and physically. Which got me thinking and I got to talk to friends. I thought wow, what about those really cool people that take a risk and step out of their comfort zone – they’re everywhere,” said Hoda Kotb.

In the book “Where We Belong Journeys That Show Us The Way,” Kotb and Jane Lorenzini take readers on an inspirational adventure. The book highlights the amazing stories of a minister, producer Mark Burnett and actress/producer Roma Downey, comedienne Margaret Cho, former boxer Laila Ali and other men and women who followed their sense of purpose in life. “Some were professional, spiritual, and we looked through the internet so that not everything wasn’t something about someone switching jobs. We wanted to give readers a taste of everything,” said Kotb.

The book is relatable. Everyone contemplates their overall existence and Kotb captures the essence of the answers. Whether it’s defining what makes an individual happy, do we belong in the relationships we’re currently pursuing or perhaps is our current career the right choice – life happens and as individuals we should make an effort to live life to the fullest.

“I will say first of all, I don’t think it’s a smart idea to quit your job, leave and pursue everything on a whim. I do think if you have something you know you love and you’re afraid to pursue it then put 10% of your time and money towards the things you’re looking for,” said Kotb. “Then you have a toe in it and you don’t feel like you’re in some unending path. You have something that you may end up switching into a profession. The funny thing about loving something is that you there are a lot of talented people and they’re not doing what they’re supposed to be doing. You sort of give up! If you look at these stories and these people, you’ll find an incredible amount of tenacity and spirit. There’s a voice inside.”

Kotb believes that “Where We Belong” is her way of confirming, maybe even to herself, that when you think it’s impossible to create a rewarding life that it actually isn’t. The stories are validated proof that change is possible and dreams are attainable. Unfortunately, many people think that life has passed them by and it’s too late however these stories prove that it’s never too late to create a life that you belong in.

In between each story are inspirational quotes that act as offerings from those who’ve identified their place and wish to inspire others to do the same. One of those life changing quotes is by Jim Rohn, “If you don’t like how things are, change it. You’re not a tree. You have the ability to totally transform every area in your life – and it all begins with your very own power of choice.” As Kotb and Lorenzini articulate in the book, the impossible is in fact possible – you just have to be willing to never give up and fight for the space where you belong.