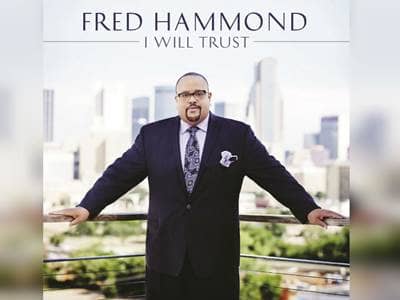 With over 35 years in the music industry, Fred Hammond is a gospel legend. From his start at age 19, as bass player for gospel-singing group the Winans, to his most recent tour (Festival of Praise) with friend and fellow singer Donnie McClurkin, Hammond’s music has ministered to the masses.

He bears such titles as the “Father of Urban Gospel,” and the “Babyface” of gospel music. He has been influential in the lives of many other gospel singers, being the founder and CEO of record company, Face to Face Productions. There is no question that his impact reaches the artists of today.

But he’s been through some hard times, as any music veteran would. This year was particularly harrowing, as he underwent a double-knee replacement surgery and had to learn to walk again.

“It took an amazing toll on me,” Hammond explained. “It was a really rough time, emotionally and mentally rough.”

Going through the same surgery that his father experienced and died from, he understood the risk, but knew it was necessary. From that painful process came spiritual healing and music. His latest album, “I Will Trust,” is considered his most appreciative body of work.

“I wrote myself out of depression, and it was hard,” he said.

Enduring rehab and physical therapy, Hammond used his own experience to tap into the mix of emotions that accompany trauma and the process of starting over, and reach others who have gone through trying times.

“I wanted to feel what people were feeling during a traumatic time…and be touched by the feeling of everyone else’s issues.”

Hammond would write the first single, “I Will Trust,” at the start of his physical therapy, which features his daughter, BreeAnn Hammond, who is following her own career in music. The stirring music video flicks between Hammond and his daughter singing, and the story of a woman dealing with an undisclosed illness. Her friends show up at her house to encourage and lift up her spirits, and continue their support for her at the doctor’s office as she prepares for testing.

Other powerful tracks – His Perfect Love, Take Me To the Water, and I Owe It All – delivers profound messages of praise and reflection. The album, reaching #1 on the Gospel Billboard charts, has received positive feedback and overwhelming support from his fans.

But while hit songs, albums, and the many accolades that surround Hammond’s musical legacy is celebrated, his bold faith and unwavering commitment to God is the true testament.

“It’s really simple, no matter what, God is good,” Hammond says. “And I just keep that as my focus.”

'I Will Trust' can be purchased on iTunes here.