Entering his eighth season of NASCAR Sprint Cup Series Michael McDowell’s name might not be well known to everyone in the sport, but this athlete views it from a heavenly perspective. 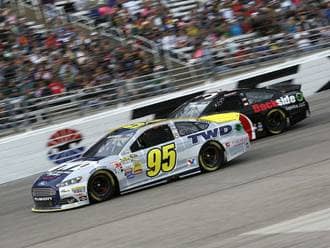 Entering his eighth season of NASCAR Sprint Cup Series Michael McDowell’s name might not be well known to everyone in the sport, but this athlete views it from a heavenly perspective. “Somebody like me who is not a predominate figure in our sport, I’m one of 43 athletes. I don’t have a name like Jeff Gordon or Jimmy Johnson. God is using me, despite what the world would say is not a popular driver and it’s amazing.”

McDowell works with ministries and shares his testimony at NASCAR events. It gives people who might not know Christ an opportunity to hear the Gospel. “It’s a cool tool that God uses to bring people to know him through a different platform.”

McDowell admits that’s he’s been stretched, but has leaned on his faith to push through trials. It’s been worth it, as he’s seen many come to Christ through witnessing and being involved in up to 10 outreaches a year. “For people to come to know Christ as their savior through small groups and through Bible studies, and through what God has allowed me to become a part of in the sport and around the sport is amazing.”

The Arizona native drives for the Leavine Family Racing based out of Concord, NC, who races the No. 95 Ford Fusion. They just extended their sponsorship with the Christian-based Thrivent Financial. With a member base of almost 2.4 million members, Thrivent counsels Christians on becoming good stewards. Thrivent spokesperson said teaming up with the Leavine Family Racing and McDowell is due to Christian and family values.

“We’re confident this sponsorship is helping us tell our story to more Christians who want to hear about our blend of faith and finances.” Thrivent will be the primary sponsor of 10 races and an associate sponsor at 10 races in 2015, including the season opener of the DAYTONA 500.

“It’s an unbelievable platform to share my faith, and share the gospel,” McDowell affirmed. “To have partners come along side of that is unbelievable. It just shows God continually working in my career.”