Here are five examples of Broadway's musical storytellers using their God-given gifts to create contextual songs that move us toward the light. 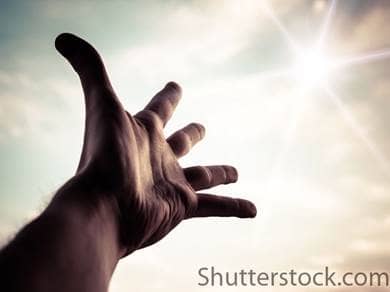 "When you’re a producer and you’re putting on a play eight times a week, you have some responsibility as to what it is you’re putting into the world" - Carolyn Copeland, Executive Producer of Amazing Grace

Music meets story meets God. A lot of attention has been paid in recent years to the rise of faith-themed movies and television. Much has been written about, including here at Beliefnet, about the power of a well-conceived story to lift people up with a positive message in a way that a sermon (be it oral or written) might not. And, of course, the Church has been aware of the motivating power of music for centuries. Some of the most beautifully inspiring music you’ll ever hear is performed at churches. It makes sense then that combining the power of story with the power of music is a particularly potent means of changing hearts and minds and reaching into the souls of people who are feeling a bit lost -- particularly during dark and stormy times like these.

All of this brings me to the musical Amazing Grace. The play, chronicling the saga of John Newton (Josh Young), the slave captain who would go on to become a leader in the British abolitionist movement and to write the timeless hymn Amazing Grace, follows in a great theater tradition of using music to amplify powerful themes in a way that dialogue may not be able to (at least without sounding stilted or forced). At the same time, a song in the context of a moving story, is often more powerful than notes and lyrics alone.

Of course, powerful themes can be dark and depressing or empowering and uplifting. Either way, they can exert a powerful impact on the culture. Here are five examples of Broadway's musical storytellers using their God-given gifts to create contextual songs that move us toward the light.

Amazing grace, How sweet the sound

I once was lost, but now am found,

Was blind, but now I see.

Though a new musical (coming to Broadway fresh off a successful run in Chicago), Amazing Grace starts with the amazing advantage of being built around one of the most popular and moving spiritual songs of all time. How can anyone who has been battered by life -- and maybe made some wrong decisions along the way -- not be moved by its message of hope? Namely, that no matter how wretched you may fear you've become, you are not beyond the infinite love of God.

2. Sabbath Prayer (from Fiddler on the Roof)

May the Lord protect and defend you.

May the Lord preserve you from pain.

Favor them, Oh Lord, with happiness and peace.

Set for a return to Broadway in the fall, this story of a Jewish father's struggle to protect his five daughter's from cultural forces that threaten the values he holds dear may be set in 1905 Russia but its timeless music and lyrics will resonate with parents today. Fiddler on the Roof was originally staged on Broadway in 1964.

Godspell first brought its modern take on Bible parables to Broadway in 1971. Perhaps the most memorable song from the show is Day by Day which drives home the point that each day requires us to make the personal decision to exercise wisdom and to do the right thing.

4. Climb Every Mountain (from The Sound of Music)

Every path you know

Till you find your dream

A dream that will need

All the love you can give

Everyday of your life

For as long as you live

The Sound of Music first came alive on Broadway in 1959. Among its many enduring melodies is Climb Every Mountain. A more potent reminder of the value of discovering your God-given path and having the faith and courage to lovingly follow the dream He has placed in your heart is hard to think of. The song beautifully amplified the message of the story.

That people come into our lives for a reason

Bringing something we must learn

And we are led

To those who help us most, to grow

If we let them

And we help them in return

Wicked has been a staple on Broadway since 2003 -- and For Good may be one of its most popular songs. The lyrics above certainly convey the idea that our lives touch each other -- and that we are here to help and learn from others. Perhaps bowing to our more cynical age, the following line is "Well, I don't know if I believe that's true. But I know I'm who I am today because I knew you."

Still a nice song - but, though I'm not a lyricist, it seems to me the line could just as easily be something like "Well, I know that to be true because I know I'm who I am today because of you." I know it's a subtle change -- and some (probably the writer) may disagree. I’m all for nuance within a story and flesh-and-blood characters expressing understandable doubts. But, once in a while (particularly in a song that tends to repeat in my head), it's nice to hear the utterance of full-throated faith. The unabashed idea that every life has meaning and that a Force for Good is in control of the world has power. Injecting doubt into an otherwise inspirational song, IMHO, tends to dilute that power. There's enough unmitigated doubt and cynicism out there in the culture. Let the production’s book deal with the nuance. I want the songs I end up singing to myself to be refuge of faith and hope when it feels like the world is pulling me down. The words we play back in our minds and hearts matter.

To be sure, life can be tough -- and that needs to be realistically depicted in drama (and comedy) -- but, IMHO, the songs that reach most deeply into our beings should unambiguously tilt (and lilt) toward the light.

A well-crafted musical can change the way we see and respond to the world -- and, in so doing, can play a role in actually changing the world.

John Kennedy is an Entertainment columnist for Beliefnet. To read more from John, visit his column Faith, Media and Culture .