Black Nor White: Love Has No Color

Is it possible to imagine a color blind America? An upcoming film "Black or White", starring Kevin Costner, thinks so. The movie walks us through confronting racial tension, an ugly history and past pain through the lens of love. 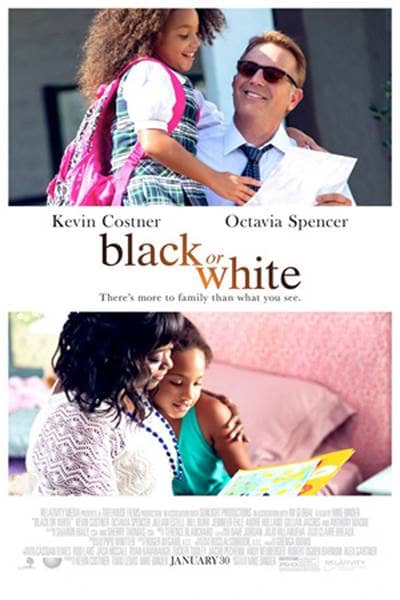 Recent court cases and killings have left this country re-opening a wound that never seems to really heal. The idea of reconciling racial tension is a daunting task, yet Mike Bender’s movie "Black or White", in theaters January 30th, is brave enough to attack this issue unflinchingly and in a very authentic way. Acclaimed actor, writer and movie director Kevin Costner talked with us about his role in the film and why it was a project he just couldn’t say no to. “I don’t pick these movies,” said Costner. “They seem to come along.” And it’s safe to say it came along to the right person. Costner not only played the lead in the movie, but also backed a large portion of the financing in order to see this project come to life.

Costner plays Elliot a middle-aged widower battling to keep custody of his bi-racial granddaughter, Eloise (a lovely Jillian Estell). Her paternal grandmother Rowena aka Grandma Wee Wee (Octavia Spencer) gives a lively performance with a “no-back down” approach that adds greatly timed comic relief. Both families go to war against one another, playing up each other’s flaws and bringing to light hidden weaknesses in order to make their case. Reggie (Andre Holland), Eloise’s absentee father is attacked for crack addiction and Elliot for his alcoholism struggles. Though the custody battle takes some ugly turns, ultimately both families want to ensure the security of the child.“What makes the movie so important and so believable is that both characters have problems,” says Costner. “It’s not just one. When people see that they think, number one that’s interesting but most importantly they think it’s fair. And that’s a good way to look at people, because no matter how someone is presenting themselves, people are flawed.”

As a quote from the film alludes, healing racial wounds begins when we start taking ownership and saying, “It’s not about black and white, it’s about right and wrong.” The film has a way of inspiring us to move beyond the racial tension of the past and look forward to the history that we are responsible for creating today. It seemed the real protagonist and hero of the film was the granddaughter, Eloise. Her character in some ways parallels the hopeful attitudes of future generations in this country. Her desires were motivated by unconditional love. Her attitudes were not tainted by a negative past history. She embraced each character, flaws and all. This little girl’s light set into motion necessary change in others and helped heal festering wounds of the past.

In order to get there, we have to embrace a conflict style driven not by the color of someone’s skin, but in the words of Dr. Martin Luther King, Jr, “the content of their character.” This is true across generations and cultures. Despite the title of the movie Costner explains this is a film for everyone, “Hispanics, Asians, Native Americans and everybody has felt the bite of being overlooked. We don’t want to be overlooked in class, we don’t want to be overlooked in our job and we certainly don’t want to be overlooked as we live our lives and interact with other people.” The film opens up a dialogue and breaks forth a transparency vitally needed in America for such a time as this. "Black or White" movie goers will leave feeling urged to be more color blind, instead of being blinded by color.

To join the discussion and learn more about the film search the hashtag #LoveHasNoColor.