Call them risk-takers, or rebels. But these actors play by their own rules, and carved out their own destiny. 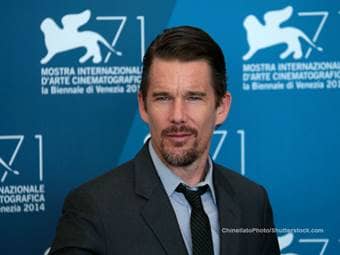 Call them career risk-takers, or rebels. But these actors play by their own rules, and carved out their own destiny. Ethan Hawke, Angelina Jolie, Patricia Arquette and Chris Pratt took risks in signing their names for projects that were iffy. Hawke and Arquette took on “Boyhood” that spanned over 12 years of filming. The cast would meet once a year to shoot the film about a family torn after divorce, and follow Mason (Ellar Coltrane) grow up on screen from the age of 6. Directed by Richard Linklater, who also directed films like “Dazed and Confused,” asked Hawke in 2002 to participate in the project with a moderate budget. It was an act of faith, and crazy idea to sign onto a project for 12 years he told, NPR in 2014.“Here I am about to turn 44, and it's really the time where I feel like it's time for me to get a real job I hate like everybody else,” he said. “And now the biggest harebrained scheme of my life has gone well. And I want it to serve as a kind of call to anybody with a harebrained scheme that it can work out…”

Hawke has a Golden Globe nomination, and the film has been touted by critics. When Chris Pratt looked at taking on the film “Guardians of the Galaxy” he told The Hollywood Reporter he thought it was going to flop, but, and watched the cosmic adventure gross over 600 million last year.

“For me, I was like, ‘Oh, so this movie is going to bomb. Done. This is the end of my career.’ ” Pratt was homeless in Hawaii before becoming superhero Peter Quill, and has graduated to Hollywood’s A-List.

Angelina Jolie worked hard to get the nod to direct the hit motion picture “Unbroken,” the inspirational story about Louis Zamperini. It would be her second time directing. She directed “In the Land of Milk and Honey,” which captured a Golden Globe nomination for Best Foreign Language Film, but this was a bigger budget and cast. First she needed to be sure she was passionate enough about the script, since it would take her away from her family. With the green light from the home front, she pursued the project, but Universal had reservations. She made storyboards, took pictures on the Internet and taped them onto cardboard, and put them into a garbage bag and presented her vision to the studio.

“I pitched my butt off convincing the studio I could do the job.”