An Epic Musical Production: The Sound of Music 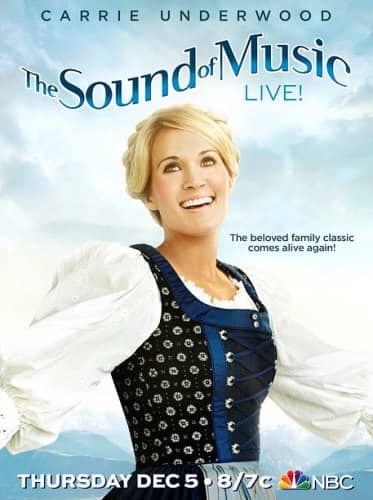 On December 5, 2013 NBC will air a live-three hour production of The Sound of Music. The production will not be a remake of the 1965 movie rendition starring Julie Andrews; instead the piece will be centered on the 1959 Broadway performance.

During an interview with Ryan Seacrest, Underwood stated that she believes that she has the talent to fulfill the role. “It’s different because normally I say whatever comes out. I’ve never had to memorize lines before and really buckle down. It’s a different kind of music,” said Underwood.

The Sound of Music will be Underwood’s first mainstream role outside her country music career. But there is no doubt that Underwood has the vocal guns to hold her own. NBC’s Chairman Bob Greenbalt released a statement in regards to the character Maria, “She was an iconic woman who will now be played by an iconic artist.” The cast is currently rehearsing daily, for a few months, in New York.

Many entertainment sites are already comparing Andrews to Underwood, noting the similarity of the two in their featured production posters. Underwood says that she watched the film starring Andrews, growing up however she warns viewers, “This is the musical version, so it’s different.”

The Sound of Music will be directed by Beth McCarthy-Miller and Rob Ashford and produced by Craig Zadan and Neil Meron.